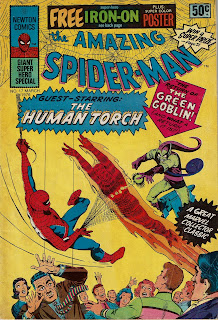 The Newton Comics series has been complete since August 2017. I daresay Newton collectors will sigh with recognition when I say all 'complete' Newton Comics series have an asterisk beside them because there's always an issue or two that needs to be upgraded to include the missing poster or swap card, and mine is no different - there are a couple of issues in this category for me. But I still deem the run to be complete. It has taken me a little over 10 years to put this lot together. Many of the issues have been replaced and upgraded over the period, but it was a single purchase of 6 issues in VF/NM condition in 2010 which set me on the proper path to putting this batch together. 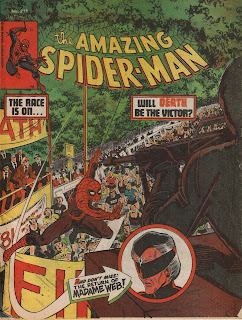 The Yaffa series is quite idiosyncratic, with three distinct phases, varying physical dimensions and page counts, and a rather awkward issue numbering regimen in one of its phases. Indeed, it's a rather awkward run to store with any effective cohesion, the magazine-size issues hardly fitting alongside the regular-size issues - let alone including the many digest-size issues featuring Spider-Man. But that's just part and parcel of the Yaffa collector's lot. This lot was put together over a relatively short 26 months, bar a couple of issues I'd had sitting around the Junkyard doing nothing but taking up space, before I became interested in them. As you might expect given the short timeframe, it was four separate batches of half a dozen high quality specimens which set the pace for this batch 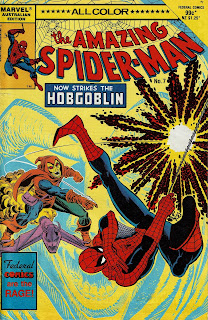 A special mention is warranted for the Federal run as the first issue in the series was actually titled Marvel Tales Starring Spider-Man, which brings the tally of Australian issues of The Amazing Spider-Man to a neat and even 60 - but again, we're left to resorting to a qualifying asterisk to make the even number. The Federal issues really took no time at all - I already had 4 issues lying around before I decided to round up a complete set, and within 6 months or so the deed was done. Only one issue cost me double digits, but it's so well preserved it looks like it was printed yesterday.

Of course these weren't the only Spider-Man issues published during this period by Australian publishers. Ongoing series such as Peter Parker The Spectacular Spider-Man and Marvel Team-Up kept Spider-Man's profile prominently displayed amongst newsagency shelves, as did quite a number of one-shot issues - notably from Yaffa and Newton Comics - but these 59 issues bear the iconic title and masthead of the premier Spider-Man title which is inching its way towards its 800th issue in the US series.

There is one Australian Spider-Man-related issue which has eluded me lo' these last 20 years or so. When it is secured it will complete another Australian series for me. And when it happens, you can be assured you'll hear of it here.