Here's a nifty little comic that fell into my hands this week - Superman Super Library #37: 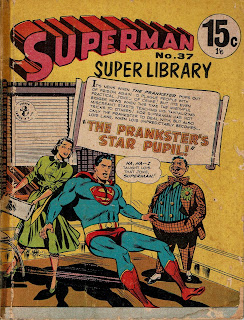 As per the established pattern for this series, the cover is cribbed from the splash page to the main feature: 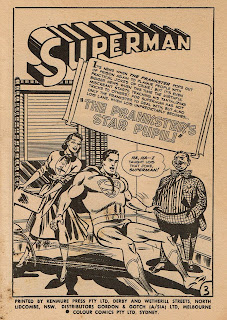 Over the years I've paid scant attention to this series. Although it was published in the 1960's, a period of enduring interest for me when it comes to K.G. Murray comics, this is a series which never really piqued my interest the way other Superman comics did.

Having said that, there is one issue in this series that I can recall coveting, and that is Superman Super Library #23: 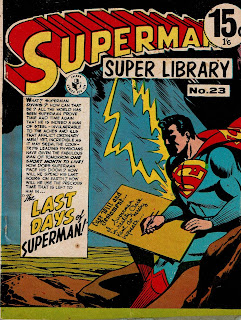 It's a striking cover with bold primary colours contrasting with the dark shadows, an atypical Superman cover, and a rather poignant image for a key story which had been recycled in the Silver Age, and has been a touchstone for latter Superman stories by the likes of Grant Morrison and Alan Moore. In fact, I've often wondered whether it was this image which partly inspired the framing sequence of Moore's last Miracleman arc in which the hero inscribes his journal of steel pages with a stylus of bloody light. At any rate, it's certainly a worthy cover for the story - it was originally published behind a generic cover as it was a backup story, not the lead feature.

Nevertheless, quite despite myself,  I've amassed a shoebox worth of Superman Super Library issues - to the point that a complete run of all 44 issues is well within reach. That's just how things roll sometimes in the Junkyard. So I guess the right thing to do is to put my custodian's hat on and pull together a bone fide full run. I mean, someone's got to.
Posted by spiros xenos at 9:27 AM