Combat Kelly and the Dirty Dozen: The regular and the digest

Yaffa's Combat Kelly and the Deadly Dozen #1 is a regular-size edition with a $1.10 cover price and was published c. May 1982: 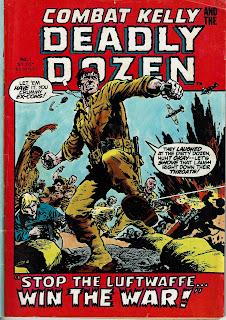 It was recycled as a digest-sized $0.75 unnumbered edition some time afterwards: 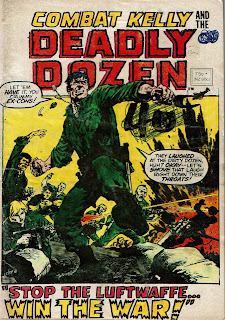 Neither issue has a Yaffa indicia date, but that is not unexpected at this stage of the Yaffa licence. The digest issue could have been published at any time between mid-1982 and early 1984.

What is surprising is that the $1.10 edition is numbered #1. Typically at this stage the regular-size Yaffa editions were recycled reprints of earlier issues in an ongoing series, and either unnumbered, or numbered after preceding digest-size instalments of the ongoing series concerned, and effectively earmarking the end of said ongoing series. This issue presents itself as the first issue of a new series in 1982. Whilst this is not unprecedented by Yaffa, it is quite contrary to the norm.

Which says to me that I should expect to find an earlier Combat Kelly and the Deadly Dozen #1, probably with a  $0.60 cover price, issued around 1978 or so. TBC.