In his book A Life In Comics: A Personal History of Comics in Australia, Philip Bentley tells the story of how he and Greg Gates befriended John and Stephen Corneille, "the city's first fan dealers", who bought and sold comics by placing advertising slips in comics they sold at Franklin's second-hand book shop and through the Trading Post, and who "organised a meeting of comic fans, probably orchestrated as a club through Melbourne University" before eventually going on to publish The Australian Comic Collector fanzine.

However, before these forays into organised fandom, whilst they were still in high school, the Corneille's placed an ad on their school noticeboard seeking other likeminded comics fans with which to trade and socialise. Answering this notice was a young comics fan and budding artist, Jan Scherpenhuizen, who befriended the twins and began to hang out with the Corneille's at their Eltham home.

Cut to 1976 and John Corneille is known in fandom as 'Gentle John', the one-day-a-week editor at Newton Comics, responsible for pasting the comics together and keeping the readers informed via the Marvel Bullpen/letters pages. Amongst the last batch of  comics he was responsible for was Newton Triple Action #1: 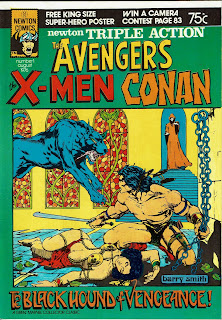 As per the subtitle this issue contained a variety of Marvel features. One of the features in this issue stood apart from the slick Marvel product. Untitled, uncredited and unsigned, the 5-page story featuring a knight fighting a supernatural being was written and drawn by none other than John's friend Jan.

I knew there must be a tale behind this rather odd feature so I decided to look up the artist and, a few days ago, I was on the phone with Jan who kindly spent some time reminiscing about those long ago faraway days - and the story he had to tell entailed some quite interesting turns.

Although neither party quite recalls whether the story was solicited or whether Jan offered it to John for publication, both agree that the latter scenario is the most likely, that John accepted it as a favour to a friend, possibly while it was still a work in progress. Having a story published  in such a high profile comic was quite a coup for a young cartoonist in Australia, and according to Corneille, Newton received "several offers from wanna-be artists hoping for a chance to draw their own comic" but were dismissed because they were not commercial enough or were otherwise deemed to be unable to complete the work in the time required. Bentley also remembers working with friends on a proposed homegrown Planet of the Apes serial earmarked for publication by Newton Comics, which didn't get much beyond the planning stage.

There was no payment for the story, which Jan accepted to be part and parcel of the deal - he was stoked just to be published! Not that he couldn't have used the money. As he says:

I was pretty much homeless at the time. My parents had moved back to Europe and I was between places. Hence my feeling of kinship with Barry Windsor Smith who did X-Men #52 on park benches. I had got the go-ahead to do the story though and couldn't wait to be settled. I remember doing pages with my artboard squeezed in between cereal bowls and other mess in the flat of the girl who kindly let me and another homeless friend stay there while we looked for proper lodging. while a lot of the problems with the strip were down to my lack of development at the time, there's no doubt it would have been better if I'd not been rushing to meet a deadline and had not been trying to find my own accommodation.

It's a testament to his drive and ambition that Jan sat for 6-8 hour stretches scripting, illustrating and lettering in order to complete his magnum opus under such less than ideal circumstances.

The lack of payment is not surprising, not just because Jan was an unknown quantity in professional terms but, as we know from the testimony of Corneille, even staff on Newton's payroll were dashing to cash their pay cheques before they bounced. I asked Jan whether he received any feedback on his work from the comics/fan community and he said he couldn't recall any particular review or commentary, but as we were talking he did recall rather ruefully that he got feedback of an unexpected kind. He's not sure now who made the call, but he does remember being abused over the phone by another independent Australian cartoonist, Gerald Carr. At the time Carr was self-publishing his own horror comic, Vampire!, and he took the young Jan to task for accepting the terms of the deal, protesting that it set an untenable precedent for cartoonists trying to make a living in such a difficult market.

As for the story in question, this is as it appeared in Newton Triple Action #1: 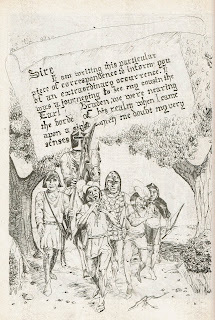 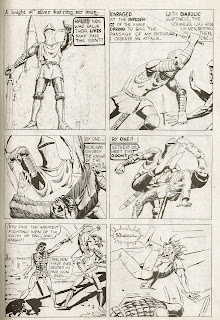 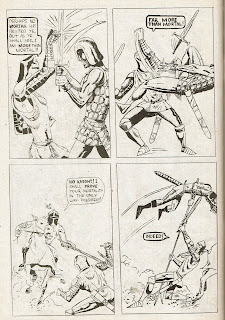 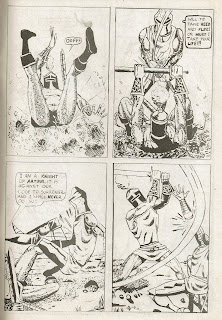 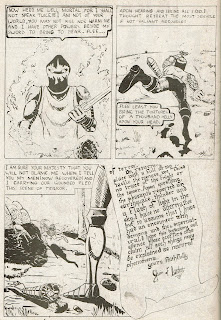 As pleased as Jan was to see his work published he also knew it was a rather crude effort, lacking the polish of the artists he admired at Marvel. In fact his words to me were that he "hated it".

Some time later he produced a new version of the story. Redrafted, rescripted and now titled One Knight's Stand, the new version exhibited a greater command of the page in terms of design and narrative, and his drawing tools were now in hands that brought him a bit closer to the comics artists he revered. Having learned his craft studying the likes of Jack Kirby and Steve Ditko he found his loyalties shifting towards the likes of John Buscema, and the pen and ink drawings of Norman Lindsay and Reed Crandall.

Jan sent me scans of the second draft and gave me permission to publish them as a Junkyard Exclusive: 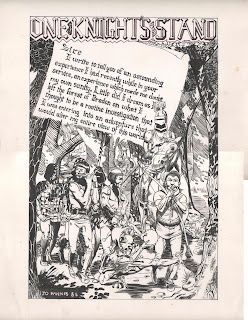 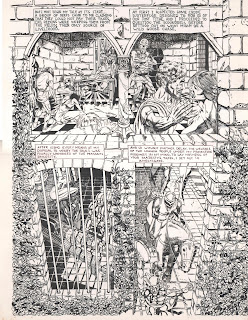 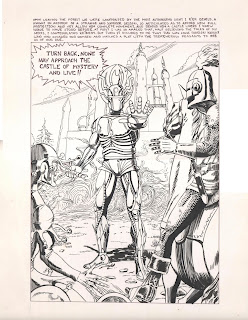 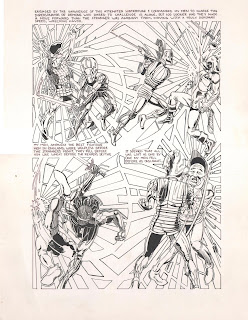 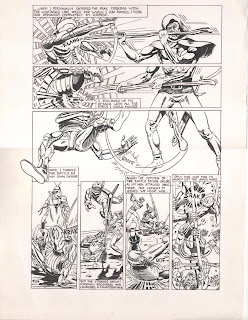 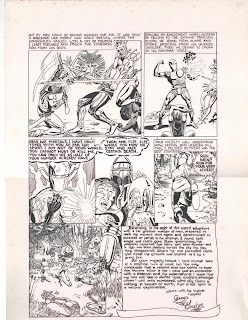 Having completed the original instalment Jan was inspired to complete more stories for publication. He completed a second piece and 90% of a third which was  lettered by a friend. These two stories would not see the light of day as Corneille ceased his duties at Newton and, as we know, things were very different in the Newton office after August 1976.

Here's an illustration from the second story slated for publication: 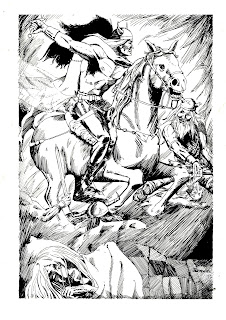 Jan has produced many notable projects over his career, only some of which I was aware of, and I was very interested to learn he is presently working on his comics-related thesis which he expects to complete by the end of the year. Of course, as a fellow PhD, we naturally did what all good comix scholars do and engaged in a friendly debate over the relationship between modernism and postmodernity.

I thank Jan for taking the time to chat about his brief connection to Newton Comics. Due to his generosity, those of us interested in the particulars of Newton Comics can now ascribe a title to the story in our indexes; we have an insight into how the story found its way into a Newton comic; we now know that there were further instalments all but queued and ready to go, if not for the untimely end to Corneille's tenure as editor; and the hostility that followed Jan's rather innocent foray into the world of professional publishing.
Posted by spiros xenos at 6:49 PM

A fascinating anecdote, Spiros! I've been intrigued by that particular story ever since I bought a second-hand copy of "Newton Triple Action" more years ago than I care to recall. I was always curious as to its origin, and how it came to be published in so unlikely an outlet - and now you've provided us with the explanation. Many thanks, sir, and a big “thank you” to Jan for providing the redone version.

Just amazing. All these years I had the Newton Triple Action and it had been years before I twigged that this was an Australian Marvel exclusive original!