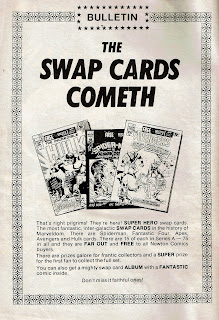 The advertisement above mentions the Swap Card Album. The album was also advertised on the cards themselves: 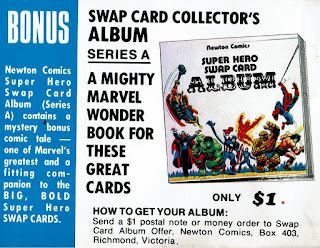 The image suggested the album was a square or rectangular block. In my mind's eye I imagined it to be similar to a photo album or a stamp album with pockets to hold the cards. And maybe that was the original intention. Or it may have been advertised this way due to the source of the image, which originally appeared in a similar shape on the Mighty Marvel Calendar for 1975: 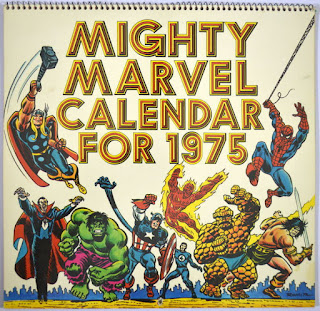 Regardless of intentions and the pre-production image, by the time the Album was produced it had altered in size and the cover type had been modified: 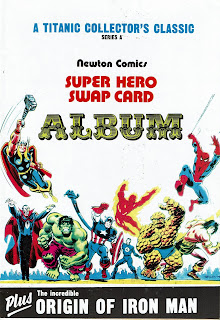 The Album was actually the same dimensions as a regular comic book with stapled newsprint paper. Rather than pockets for the cards there were pages printed with header titles for the various sets and numbered panels designating where the cards should be pasted: 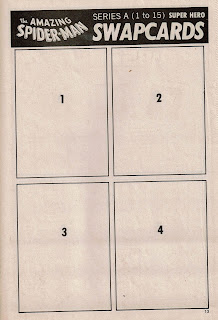 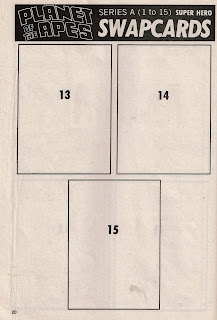 As per the samples above, each series was allocated three pages of four squares and a fourth page for the 13th to 15th card.


According to The Swap Cards Cometh ad there was a Fantastic comic inside the Album. This suggested a freestanding comic book. By the time the Album was available the "mystery bonus comic tale" was no longer a separate comic book nor a mystery, as the cover announced the Origin of Iron Man: 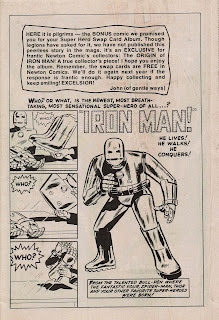 This story began on page 3 of the issue with a modified splash page. The splash page is modified from the cover of Tales of Suspense #39.

The story ended on the inner rear cover of the book: 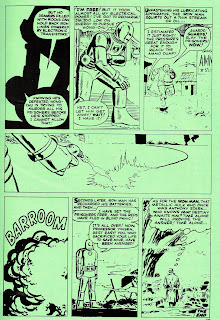 In other words, the Iron Man story bookended the issue, and in between the story pages were the swap card pages and full page advertisements for other Newton Comics issues: 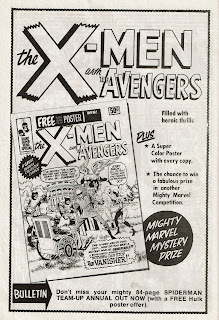 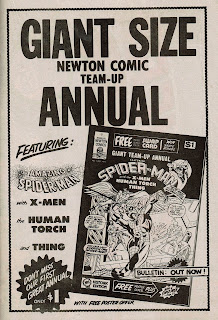 The cards included a rather convoluted offer for discounted comics involving the remittance of value stamps. This offer was also advertised in the album, along with a grid on which the cards could be placed for submission: 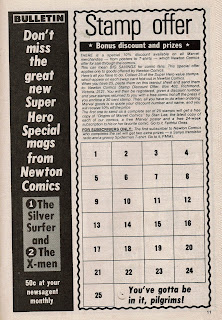 A subscription page was also included: 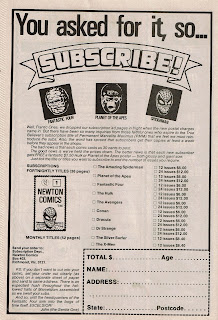 A year or two ago a Swap Card Album was listed on eBay. Here's a picture of a double-page spread with some cards attached: 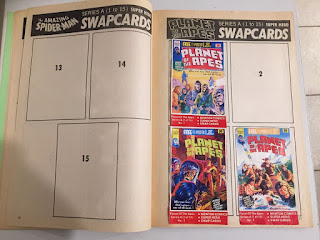 I don't believe there is an album with a full set of 75 cards. The cards were only available in issues published September-October 1975. The fifteenth issues of series such as The Amazing Spider-Man and Planet of the Apes were not published until December 1975-January 1976, and the rest not until well into 1976 and given the cards featured issue covers, it is very unlikely they were all printed.

Anecdotal evidence also suggests that the cards were attached randomly into issues, so whilst all copies of say Conan the Barbarian #5 contain the same Avengers poster, they may not all include The Avengers Series A (1 of 15) No. 2 card. (I have more to say about the cards in a future post.)

The Newton Comics Swap Card Album was not available in newsagencies. It was a mail order item only for $1. According to John Corneille the Swap Card Album was a huge success with a "record number of applications". One may glean from this that there are heaps of Swap Card Albums around. If so they are tightly held by those who ordered them at the time. Like the other goodies one had to order directly through Newton, such as the exclusive posters and the Planet of the Apes Kits, they are very difficult to find in the collector's marketplace. Apart from my copy I have seen or heard of maybe three or four other copies in the last dozen years or so.

This is another sought after Newton collectable rarity but they do turn up random but only very occasionally. I found one on ebay in the 2000s and snapped it up! But get this, the one that I bought turned out to be walking distance a few streets away from my home suburb of Salisbury! All the years I had lived wondering where they could possibly be and all the time one was a few stone throws away under a nearby roof!

Ha! That's the thing about the Swap Card Album - anyone who has one has a cool story about how they got it.

I was pretty excited getting mine. It was my tipping point for Newton collecting - I figured if I could get this, then there's no reason not to get all the issues, including posters and cards.