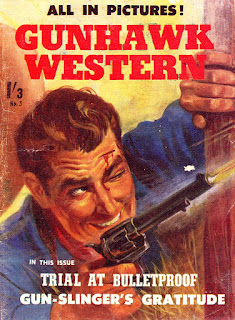 Following on from an earlier post on the cover image used on Gunfire #46001 and Cheyenne #3218, here’s the same image adorning the cover of an even earlier Jubilee Publications comic, Gunhawk Western #3 – and props to you if you also immediately noticed the bloody cut above the character’s left eyebrow.
I said in the earlier post that I thought I’d seen a later edition of Gunfire #46001 with a higher cover price. If that turns out to be true that makes at least 4 comics with virtually the same cover image. Could there be more? Who is the artist? When and where was this image first published?
I can see this is going to turn into a minor obsession.
All my info on this issue is courtesy of James’ indispensable Ausreprints site.
Posted by spiros xenos at 2:32 PM