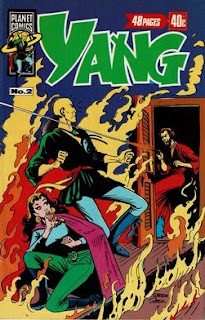 Well, it’s been quite a number of years between drinks as far as a certain little dark corner of the junkyard is concerned, but yesterday, latent primordial neurons and endorphins were once again activated, by the appearance of a copy of Yang #2, which proved to be just irresistible.

Seriously, this copy is so well preserved it feels like it came off the rack a week ago and has been read and stored in my 12-year-old bedroom since then. And that’s as good as Planet Comics from this era get.
I know very little about Yang, just as I know little about the Martial Arts genre in general.
What I do know is that this purchase of Yang #2 and Yang Master of Kung Fu form bookends around a few other Yang titles and issues which found their way into the junkyard over the last few years with barely any conscious intent on my part. 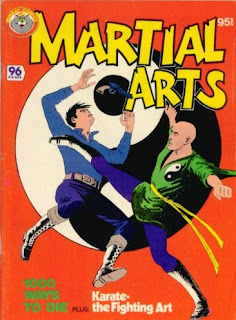 For example, this one-off unnumbered issue titled Martial Arts was purchased almost 10 years ago and was intended to take its place amongst the many other Murray Comics one-shots with a similar profile amongst my collection, and at the time it was only distinguished in my mind by the mix of Charlton and Spanish material, not the Yang reprints per se. 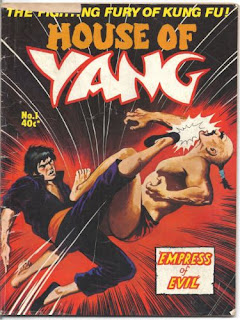 Similarly, this rather worn and badly patched up House of Yang specimen was amongst a batch of Gredown horror comics I picked up some 5 years ago at a fair, and it would have been the lowest priority of the lot, possibly used as padding to protect some Pit Of Evil issues.
Short 3- or 4-issue runs of titles were rather uncommon for Planet comics in this period. Blue Beetle and Hot Rods come to mind, as does the earlier Johnny Galaxy and the Space Patrol. I imagine Blue Beetle, Hot Rods and Yang being considered by the editors as fodder for a Planet Series 4. That kinda appeals to me. And I note Yang does make an appearance in Martial Arts Album Planet Series 3 No. 6.

No doubt in a few years I'll be updating this blog with a complete collection of Murray and Gredown Yang issues, all in NM condition and all sourced without purpose or focus. It's just how it is sometimes in the Junkyard.
Posted by spiros xenos at 8:49 AM