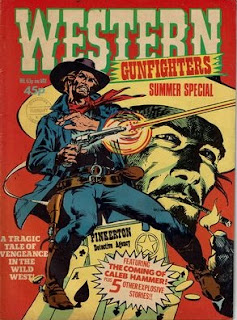 One of favourite Bob Dylan albums is 1997’s Time Out Of Mind, and one of my favourite lines from this album is “When you think that you’ve lost everything/You find out you can always lose a little more” from Trying To Get to Heaven Before They Close The Door.

Dylan has been variously accused or lauded for borrowing or stealing lines from others, in particular from vintage noir films.
I got a pleasant surprise reading the first page of the Caleb Hammer story “The Devil's Starry Anvil!”, which originally appeared in Marvel Premiere #4, June 1980 and was reprinted in the U.K. as the opening story in Western Gunfighters Summer Special NN, February 1981.
The first caption box ends “...a man with nothing to lose could lose still more”. I’m not saying this was the source for Dylan’s song, but the similarity is uncanny. For all I know this pulpy piece of hardass western noir writing by Peter B. Gillis is itself adapted from another hardboiled film or pulp novel, or has otherwise gone completely unnoticed for decades.

What I do know is that it’s a great piece of hardboiled pulp philosophy, which can be read as either typically downbeat and fatalistic as any drawl delivered by a B-grader from the 1940’s, or indeed as  life-affirming. And it drew me into speed-reading this story whilst I should have been doing other things.
I picked up this issue in a batch of other Yaffa/Page issues, and on first look it appeared to me as a previously unseen Yaffa one-shot western. There are a few Australian series titled Western Gunfighters by various publishers, including Yaffa, but not this one. I’d love to find that such an edition does exist. Pending that, I’m filing this along with my other Yaffa magazine-size Westerns.
Posted by spiros xenos at 11:10 AM