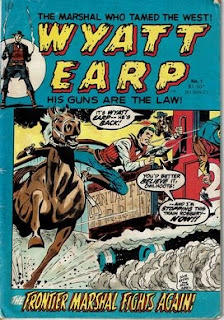 I picked up this Yaffa/Page issue of Wyatt Earp #1 the other day without really knowing much about it.


What I’ve found is that it doesn’t appear on James’ site amongst the many other Wyatt Earp series by various Australian publishers, but there is an unnumbered reprint of this issue with a $0.75 cover price. Given my copy has a $1.10 cover price I’m guessing there are at least three editions of this issue published by Yaffa – these two and an initial $0.50 or $0.60 cover price issue.

The GCD actually has my edition listed as Wyatt Earp #1 but it is not indexed. It is listed as being published in 1972, but this is incorrect. No doubt the indexer has read the indicia which states in part Copyright 1972 by Magazine Management Co. Inc., and assumed this was the date of the Yaffa issue. An easy mistake to make, but the date simply refers to the 1972 series of Wyatt Earp which, it appears, began with issue #30.
And that’s where the Yaffa/Page Wyatt Earp #1 begins – it reprints the cover and contents of Wyatt Earp #30, October 1972; and then reprints the next two issues - Wyatt Earp #31 and Wyatt Earp #32, including black and white reprints of their respective covers. It appears some of the stories are reprinted out of sequence, but I think they are otherwise complete.

I’ll note also that there’s some appealing  art in these pages by the likes of Dick Ayers, Al Williamson, Reed Crandall and Angelo Torres, and the stories are all reprints from the 1950’s.
Posted by spiros xenos at 8:51 AM