The Tomb of Dracula and Night of the Vampire: Now it all makes sense... 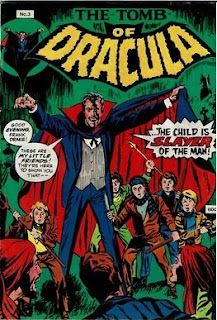 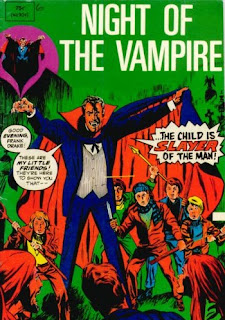 I like looking back at some of my posts on comics from years ago and seeing what I knew then and what I know now.

At the time there were so many gaps in my knowledge that I would make an educated guess as to the providence of an issue or a series and be confident that I had put the available clues together to at least form a cohesive narrative which stood up to immediate scrutiny, often with a dash of hope that time would not make me look foolish.

I also knew that it would only take one more missing piece of the puzzle – a date, an advertisement, a missing issue turning up – to make me recast the narrative.

Case in point: Night of the Vampire – at the time I was not yet au fait with the pattern of the Yaffa Marvel series of reprints. I knew that a typical series might begin with 6 to 10 consecutive issues reprinting 3 original Marvel issues. I wasn’t so aware that these series might run for just a few in the full magazine size edition and then convert to digest-size issues, and then maybe revert to reprinting one or two of the earlier issues as a late numbered issue in the series as the licence petered out, and that those last issues may either revert back to magazine size or remain digest-sized. Nor that once the numbered series ended a ‘new’ unnumbered, retitled series of digest-size issues may become a proxy reprint series of the originally published series.
And of course, the very existence of unnumbered retitled issues was one of the greatest mysteries of all. That is, they could not be catalogued as existing until they turned up in other collections or on the collectors’ market, and hence you could never be sure that a full set had been compiled.
A good 10 years of spotting such issues has answered plenty of questions for me. Not all, but enough of a pattern to give me more confidence in the narrative of the puzzle.
The Tomb of Dracula #3 provides one such opportunity to reflect on what I knew and didn’t know. I wasn’t aware of this issue at the time but I had in my hands a copy of Night of the Vampire, an unnumbered one-shot digest-sized issue from Yaffa/Page. Whilst I was able to identify the source of the contents form Marvel and associate it with the parallel Newton edition, I didn’t realise it was in fact a reprint of the earlier Yaffa/Page The Tomb of Dracula #3.
One thing this does is help me to predict that there are more issues of The Tomb of Dracula reprinted as retitled, unnumbered one-shots. The Tomb of Dracula #1 was reprinted as The Tomb of Dracula #11, the last issue in the initial series. As above, The Tomb of Dracula #3 was reprinted as Night of the Vampire. That suggests that there is a retitled, unnumbered, digest-sized edition of The Tomb of Dracula #2 published by Yaffa/Page which will, at some point, turn up to take its rightful place in the catalogue. The cover will be based on The Tomb of Dracula #2.
There are many more such instances of having identified unnumbered, retitled Yaffa/Page digest-sized issues since my initial posts years ago, and I’ll present them here all in good time.
Posted by spiros xenos at 7:50 AM