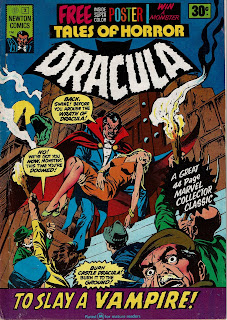 The cover to Newton Comics' Dracula #2 is modified and recoloured from the US Tomb of Dracula #5: 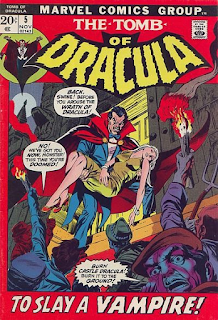 Australian editions of both Dracula Lives #1 and Vampire Tales #1 would be published by Page Publications just a few years later.

This colour poster in this issue is a modified panel from Fantastic Four #139 featuring The Human Torch, Medusa, Wyatt Wingfoot and The Thing.

This issue advertises Fantastic Four #3 as being On Sale Now. The Win A Monster contest ends September 1975. At this stage my best guess is that this issue was published August 1975. 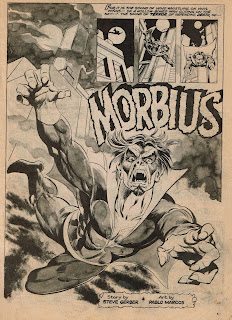 Clearly there's a story to this alternate title - if I come across any more info in this regard I'll update the post.

At any rate, Dracula #2 did not feature any Tomb of Dracula reprints despite the cover. Based on editorial comments in the letter columns of issues around this period, it would appear the proofs for  some of the Newton issues did not arrive, which is why some of the early Newton series had 'odd' 2nd issues. The scheduled  material for Dracula #2 - Death to a Vampire-Slayer - may not have arrived at all, as I'm unaware of a Newton printing of this story.

The cover did reappear in Newton Comics as a colour poster, and the issue came with a Mature Readers warning - or rather, an enticement!
Posted by spiros xenos at 9:28 AM