Newton Holiday Spectacular: Recycling the contents and the cover 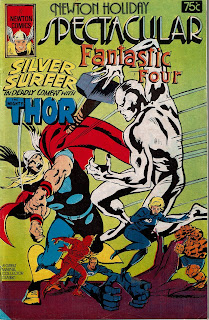 The Merciless Puppet Master had been previously published by Newton in Fantastic Four #10.

The Good, The Bad, and the Uncanny! had been previously published by Newton in The Silver Surfer #4. Indeed, this issue also featured the original classic cover image by John Buscema.

A Skrull Walks Among Us! and The Coming of the Plantman! had both been previously published by Newton in Fantastic Four #11. The bonus in the Newton Holiday Spectacular is that The Coming of the Plantman is reprinted in full (it was a partial backup feature reprint in Fantastic Four #11), and that the cover to Strange Tales #113 is also reprinted, without the Marvel trade dress.

So there's maybe just a little content-wise to entice you to pick up this issue if you already have the other Newton comics. The sweetener of course is the cover - another in a line of Newton contrivances which both appeal and frustrate. The appeal is partly the odd montage and variance factor. The frustration is knowing you know where the images come from, but they remain just beyond the reach of your recall. I love identifying these, so here goes:

The Thor image hails from The Silver Surfer #4. The image has been reversed: 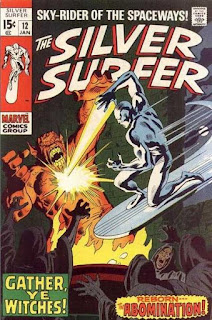 This image has been enlarged and modified a bit. 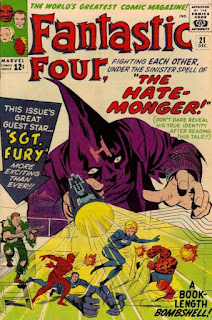 I'm pretty sure this cover was otherwise not used by Newton Comics, so I guess it was a rather effective and efficient recycling of resources in modifying leftover material for this purpose. And given 98% of the book had been previously published, it's also rather appropriate.
Posted by spiros xenos at 9:29 PM