Federal Comics recycled their unsold/returned comics. One method was via their Second Release program. Another method took the traditional route of reissuing rebound coverless copies under a new cover. There was also a third method involved - the 5-issue Comic Pack: 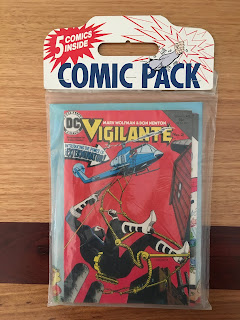 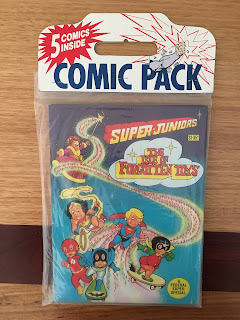 The issues in this comic pack are The New Teen Titans #8; Super Powers #2; Supergirl #5; Vigilante #2; and Super-Juniors #NN.

There is no price or date information on this pack. The issues broadly date to early 1985, so presumably this pack was issued in 1985. Maybe for the Christmas holiday period. Or maybe even in 1986 around the time Federal ceased publishing such series.

It is also possible this Comic Pack wasn't a fully-fledged Federal product. The Federal name doesn't appear on the packaging, and the rather generic design suggests a third party was involved. It is clearly designed to hang off a peg, so it may have been stocked by non-newsagency/comics retailers. Maybe it was a 1980's Show Bag-type thing.

I don't know. I got mine some 7 years ago on eBay and it is still sealed, so if there's any information inside the bag, it's staying there for the moment.
Posted by spiros xenos at 9:43 AM