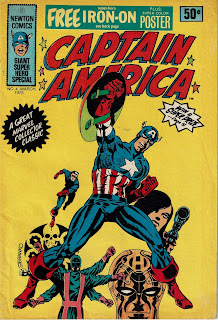 Despite the proclamation on the banner, there was no poster included in this issue. In lieu of a poster, the double-page spread offers colour in-house advertisements. The rest of the pages include the regulation letter column and more advertisements.

Interestingly, the contest in this issue has a cut-off date of 31 January 1976. These contests are often a reasonable and useful guide to the publication dates of the issues if there is no cover date. In this instance it appears to be an error. Considering the error mentioned above re: the missing poster, and the fact that one of the in-house advertisements is for this issue itself, I'd suggest that's a fair bit of evidence that this issue was put together under some strain and thus such errors crept in.

The cover is a classic Jim Steranko image originally published as the cover on Captain America #111: 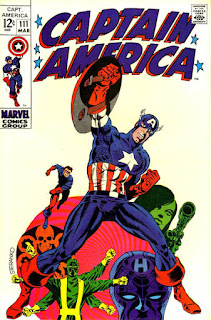 The bright yellow background on the Newton Comics edition is immediately noticeable and makes for an attractive variant to the original, but I must say I miss the psychedelic red design element of the original.

This image was subsequently reprinted in Australia as the cover to Page Publications' digest-sized Captain America #4: 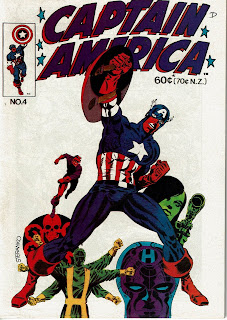 In this instance, the white background is maintained, however the psychedelic design element is again absent. Given this is absent in both books, a few years apart and by different printers, I can only guess that there was an inherent printing hurdle, probably related to linework.

Captain America #111 contains a number of  key sequences showcasing Steranko's page designs. One of these is the double-page spread on pages 12-13. The Newton and the Page editions both manage to maintain the double-page spread integrity of this sequence. The Page edition also reflects the separate pages of the "strange, mad, psychedelic nightmare" sequence of pages 9-10. However, the Newton edition happens to print these two pages side-by-side which, whilst accidental, makes for a better design and reading experience.

I doubt there was any ‘inherent printing hurdle’ for the ‘psychedelic design element’ being absent.

In this case (and many others) it appears both Newton and Page were merely supplied line (black) art, without colour separations. The psychedelic element isn’t particularly difficult to create using colour masks, but would be time consuming to recreate.

The original cover uses ‘masks’ to create tones (such as on Cap’s body) to give the illusion of depth. The Newton/Page covers use ‘flat’ colour but, oddly, someone in the prepress area at Newton decided to have a go and add ’squiggles’ of tone to the metallic Hydra head on the bottom of the page. I also wonder if the Newton folk even saw the original cover colours… red on the Hydra uniform; green under Cap’s shield; ‘normal’ skin tone on the gal with the gun, etc.

You will notice more image at the bottom of the Newton/Page covers - this also points to the supply of the black artwork so subsequent printers could crop as required.