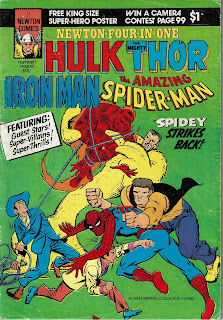 Newton Four In One #1 is cover-dated August 1976 and was published by Newton in the period after the cancellation of the first phase of their publishing program, when Newton converted its range of ongoing and one-off comics to 84-page and 100-page issues. This issue collates stories originally intended for the next issue of the respective series before the cancellations.

The cover to this issue is modified from the splash page to Spidey Strikes Back! originally published in The Amazing Spider-Man #19. Of course the cover to that issue is a classic image, but I must say I really like the Newton cover too.

The main contents are as follows: 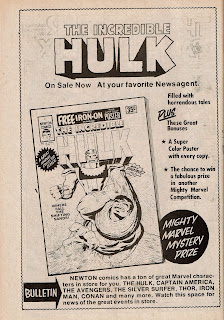 This advertisement appeared in Fantastic Four #15, cover-dated March 1976, the final issue in the series.

Tracking the Thor stories originally published in Journey Into Mystery gives me a headache. The short summary is that many were published - out of sequence - as backup features in The Amazing Spider-Man, then some appeared in The Mighty Thor Giant 100-Page Annual and the 2-issue self-titled series, then a smattering appeared across a number of one-off titles, including this Newton Four In One.

The cover advertises a Free King Size Super Hero Poster. My copy doesn't have a poster, but it isn't missing any pages. The central 4 pages comprise of 2 letters pages (printed in the incorrect sequence) and 2 pages of advertisements  for Bay City Rollers magazines and gear. There is a single page Silver Surfer pinup, which also appeared as filler in other issues around this time, for example in The Deadly Hands of Kung Fu #4. My guess is that  a loose poster ala the Sub-Mariner poster in Newton Spectacular #1 was originally included.

Some, if not all of these stories were later published in Yaffa's Marvel comics.