Air Action Library #2: Searching for Tiger in the Sky

Having spent a bit of time over the last year or two tracing printings of Page Publications digest comics - war, romance, horror, spy and western comics - I've become a bit more confident in anticipating what I will find in many issues, based on the cover art and cover price and story titles on the covers. However, now and again, an issue pops up which leads me down an expected path but leaves somewhere a little unexpected. 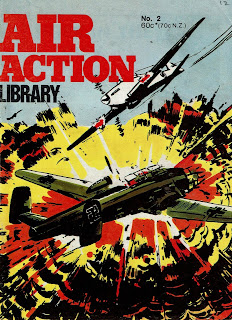 I could tell pretty much straight away a few things about this issue as soon as I picked it up. For example, I was pretty sure that the cover was a reprint of interior art, and sure enough, it comes from page 16: 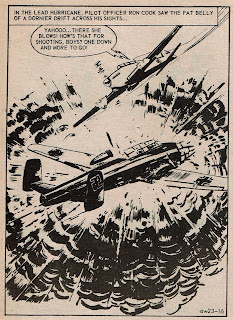 I could also tell that this would not be the first printing of the story Tiger in the Sky - a bit of searching on the GCD and AusReprint websites would reveal previous Page Publications printings of the story, the original source of the story, and likely a cover swipe of the original cover by Keith Chatto. However, much to my surprise, this issue isn't to be found on either site, and even stranger, the story Tiger in the Sky isn't listed on either site. I doublechecked my own database and again, no other reference to this story.

I did find the cover to the original source of the story on the GCD website: 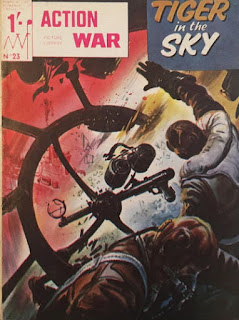 Action War Picture Library #23 was published by MV Features in the mid-1960's, but the GCD listing doesn't list the story. I tracked it by following the job code number (you can see a sample on the page scanned above) and assuming it would be an MV Features series.

So here's a couple of rather safe assumptions about Tiger in the Sky which I look forward to confirming in the future:

1. There will be a Page Publications issue reprinting Tiger in the Sky with a swipe of the Action War Picture Library #23 cover;

2. There will be at least one other - possibly more - reprintings of this story by Page Publications with cover prices lower the $0.60;

3. The cover to the third issue will be an original Chatto illustration;

4. One of these reprintings may be in Air Action Library #1;

5. I will be more excited than you if and when I confirm any or all of the above. 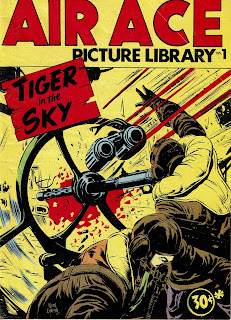 And sure enough, Chatto swipes the cover to Action War Picture Library #23.

So check your pulse and get back to me.
Posted by spiros xenos at 6:59 PM