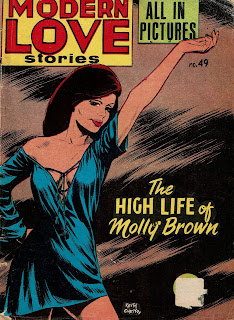 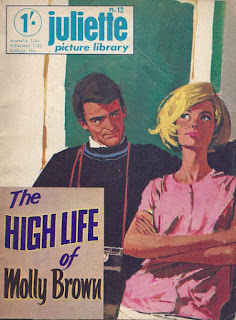 Modern Love Stories #49 features a Keith Chatto cover. Based on previously established patterns I expect that there is an earlier edition of this story from Page Publications, and that Chatto would have been tasked with swiping the cover from the Famepress edition. 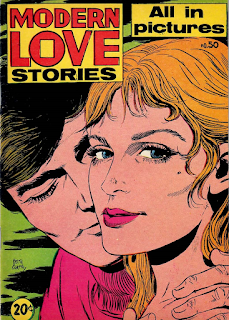 Given the Famepress edition was published in 1966, and the Page Publications editions were published in the early 1970's, the basic math equation suggests The High Life of Molly Brown, and indeed a number of the issues in the Juliette Picture Library series, could have been published by Page Publicatons from say Modern Love Stories #1 onwards if they were loosely monthly issues as far back as 1966. But I don't know whether there was such an issue. I certainly haven't seen any in the relatively short time I've been following the Page Publications romance comics, and there are no such early issues listed on GCD or AusReprints - and James has been tracking these for much longer than I have. So I'm guessing that at some point, Modern Love Stories picked up its numbering from some previous Page Publications series.

So, was there a  Modern Love Stories #1 comic? And was it published by Page Publications?
Posted by spiros xenos at 1:59 PM

My current view of Page issue numbering is that they randomly started issues at whatever number they felt like using.

Low numbered issues seem to start at #1 in most/many occasions. But many other series have a cluster of known issues around, say, #50 -- but nothing earlier.

I've also decided that I made a mistake years ago when I though Yaffa continued the numbering from Atlas/Frew/etc comics that they took over. I'm not sure that I've found any series that are actually confirmed to be consecutive. There are always (?) gaps and overlaps.