Some 20 years ago I made a list of K.G. Murray comics I wanted in my collection. This was a list of 100-page (or more) titles which began publication in the mid/late 1950's such as Superman Supacomic, All Star Adventure Comic and the Hundred Comic Monthly, series which ran into the 1970's, often under new titles such as Tip Top Comic Monthly and Wonder Comic Monthly, encompassing new branding along the way such as Planet Comics and Murray Publishers.

As you might imagine, that's quite a lot of comics. And as my collection grew and my knowledge deepened I became interested in other K.G. Murray comics, some of which stemmed from the 1960's, and many besides which were 1970's series, such as Super Giant and Doomsday and Haunted Tales. I deemed this my secondary collection.

As my primary and secondary collections grew, so did my accounting of my collection. That is, rather than relying on a Word doc. or an excel spreadsheet to help me keep up with everything, I invested in a purpose-built database to keep abreast of what I owned, what I sought, and what I needed to replace. This database serves a further purpose - it's populated with indexed entries of the issues I own, links to relevant sites, personal notes on a variety of topics, and a record of purchases. It also serves as a log of where my collection can be found. As the collection has grown, I now need references to box numbers in order to locate a particular issue. Increasingly over time it's become a record of tracked sales and prices - a personal price guide.

As far as my primary collection is concerned, I can count on one hand the number of issues I'm still chasing to complete that collection. And of those issues there is only one I have not yet seen.

As far as my secondary collection is concerned, I only need three fingers to count them. Ironically, they are all issues I have not seen. I may have come across some of them in the past and not noted them as I should have, but for all intents and purposes, I'm deeming them unseen.

These reflections stem from this issue landing in the Junkyard: 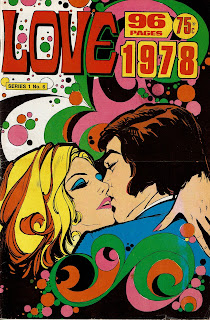 I have not seen this issue in the last 20 years, and speaking to some collectors, they were unware of it either. It's not even on the AusReprints site or the GCD. So by any definition that is meaningful to collecting such comics, this issue is scarce.

And it's interesting because it belongs to two series - the Planet Series and the Love series.

I've covered the Love series in various posts before: Love 1971;  Love 1974 and 1979; Love 1975 and 1977; And as you can tell from those posts, knowing what was published was guesswork until samples appeared in various guises. For example, Love 1979 is an instalment of Planet Series 2, others are standalone issues. It's also interesting that it's the only issue in Planet Series 1 run to not carry the Planet Comics logo.

The cover is sourced from Charlton's My Only Love #3, with minor psychedelic flourishes added. It's a shame none of the contents are drawn from the Charlton issue, as it contains the Alex Toth-drawn The Loveliest of All! (This issue was reprinted as I Love You #130 a few years later, so it with a bit of luck, this Toth story may have been reprinted in a K.G. Murray or Federal comic).

Twenty years ago I would cross a number off my list when I scored a comic I was chasing. With my database I transitioned to inputting data and holding out for the dopamine rush when I would mark the green tick next to the box which designates a title or series as complete. Now, when I score something from the handful of issues I'm still chasing for my primary and secondary collections, I just hold up one less finger and salute.
Posted by spiros xenos at 2:43 PM