A year ago, almost to the day, I posted a cover gallery of my complete collection of the Yaffa Peter Parker The Spectacular Spider-Man series. A few months later I came across another issue in the series, Peter Parker The Spectacular Spider-Man #10. It made sense at the time that there would be a 10th issue, given most if not all the long-running Yaffa series included two $0.70 cover-priced tall digest issues. And whilst I thought the discovery of a 'new' issue left the door open for a another issue in the series such as a $1.10 cover-priced magazine-size issue, I was pretty confident that the run had indeed been completed and accounted for.

So imagine my surprise and pleasure to come across yet another digest-sized issue in the series - Peter Parker The Spectacular Spider-Man #11: 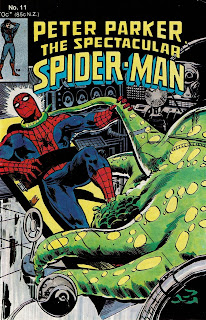 I'm sure this is from 1982, and presumably from March-May, but this is just an educated assumption.

I don't know of any other Yaffa Marvel series which include three $0.70 cover-priced tall digest issues. So this is not only a scarce issue in terms of Yaffa Spider-Man comics and the Peter Parker series, it's quite an anomaly in the Yaffa Marvel publishing profile.

Whilst I'm willing to now call this the final issue in the series, I'm happy to be proven wrong should a subsequent issue turn up.

And whilst I still think there were typically only two $0.70 cover-priced digest-sized issues in the Yaffa Marvel line-up in 1981/82, the door is now ajar for more to turn up.