Monsters Unleashed! #3: The Newton edition (and a little dash of Yaffa....) 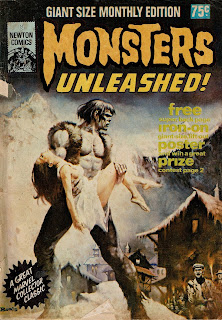 The rest of the pages consist of in-house advertisements, a contest and an iron-on transfer.


The reprinting of One Hungers in Newton's Monsters Unleashed! #3 is obviously associated with the printing in Marvel's Monsters Unleashed #8, but this story appeared earlier in Tower of Shadows #2, November 1969. One Hungers was published by KG Murray in Doomsday Annual #2, which was published within a few months of the Newton printing. Maybe the Doomsday Annual version was in some way associated with the Tower of Shadows print.

Swamp Stars of the Silver Screen is not a comics story. It's prose and photos, which I guess is why it doesn't appear in the GCD entry and I had to go looking elsewhere to identify the source.

The Little People! is the odd one out here. Whilst everything else is related to various Marvel Monsters Unleashed! issues, this story originally appeared in Strange Tales #103, December 1962, and according to the GCD, the only subsequent reprintings were in UK magazines. Even then there is some query as to the source material. I expect more reprintings of this story will be unearthed.

The cover image to Newton's Monster's Unleashed! #3 was reprinted in mid-1979 by Page Publications for Monsters Unleashed! #2: 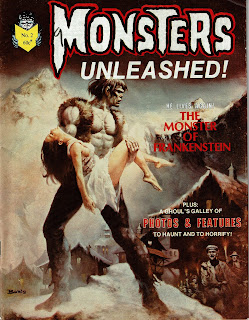 From a distance they appear identical, the requisite branding and text superimpositions notwithstanding. On closer inspection the Page edition is distinctly more reddish, and the Newton edition more yellowish. The contents however are completely unrelated. A quick check suggests the Page edition is more closely related to the US mother as it replicates the main comics features and two of the three text only features of Marvel's Monsters Unleashed! #2: 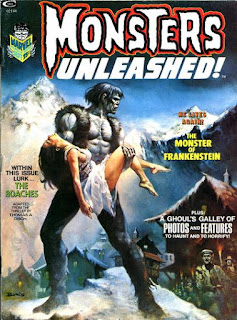 Yeah, suddenly the Newton and Page editions look much more closely related to one another than to the parent issue!