Planet of the Apes #11: The Newton edition

Newton Comics' Planet of the Apes #11 is cover-dated November 1975: 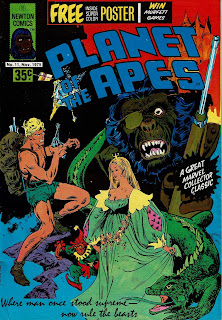 The cover image is sourced from the splash page to the opening story: 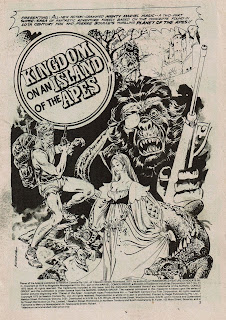 The poster in this issue is a recoloured version of the cover to Newton's Conan the Barbarian #6.

This issue was advertised in The Fantastic Four Giant Size 84 Page Annual: 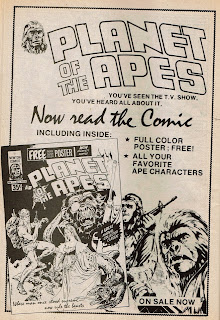 One of the more intriguing comments in all of the Newton letter columns occurs in this issue. To quote: "...a STAGGERING, NEW range of pocket-size monthly mags" are announced, and they are named as Vampire Tales, The Savage Sword of Conan, Monsters Unleashed, and Deadly Hands of Kung Fu. The pocket-size editions did not eventuate. Indeed, Giant Size monthly editions of these titles - or their proxies, in the case of Vampire Tales and The Savage Sword of Conan - would hit the stands in December. And, in a few years time, Yaffa would fulfil the wish for digest-sized editions of many Marvel titles. But the announcement does shed some light on the extent to which Newton was reconfiguring their line in terms of page count and cover price, as announced in subsequent letter columns.

PS The notice re: pocket size comics also appears in the letter columns in Planet of the Apes #9 and #10.
Posted by spiros xenos at 8:29 PM