Planet of the Apes #13: The Newton edition

Newton Comics' Planet of the Apes #13 is cover dated November 1975: 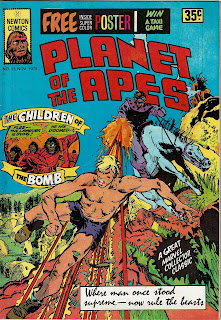 The cover image is a composite of two interior panels. The main image is from the splash page of the first story: 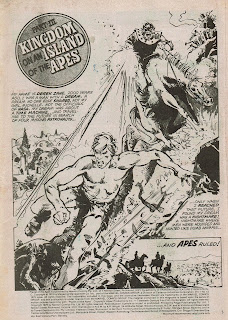 The inset image appears on Page 43 of the following issue, Planet of the Apes #14: 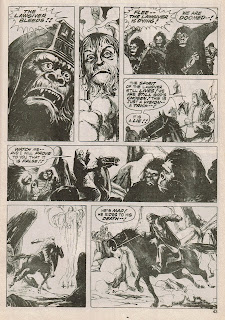 The banner overlaid over the inset image with The Children of the Bomb title is adapted from the title on page 25: 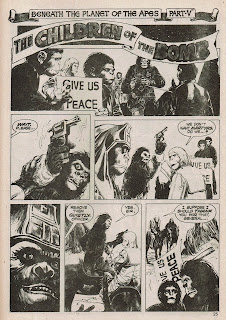 
Kingdom On An Island Of The Apes Part III [Part II Chapter 3: The City!]

This is how the title page for this story appears in Marvel's Planet of the Apes #10: 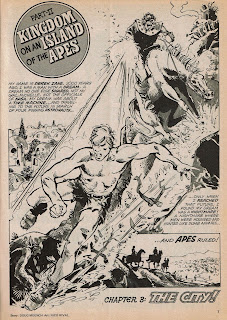 This is replicated in Newton's Planet of the Apes #NN[/18]. However, if you compare with the scan of the same page as printed by Newton in this issue, you can see the story numbered Part III rather than Part II, and the Chapter 3: The City subtitle removed completely. This is a flow on effect from errors due to crude chopping of chapters in preceding issues. Such crude editing continues in this issue - the next story is

[Kingdom On An Island Of The Apes Chapter 4:] The Island Out Of Time 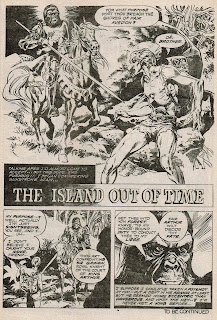 This is indeed the chapter which follows on from Chapter 3, but the buggers have decided to reprint only this single page of the chapter in this issue - see the TO BE CONTINUED note on the bottom of the page. Of course, this will lead to further flow on effects in the next issue. This chapter also originally appeared in Marvel's Planet of the Apes #10.

Beneath the Planet of the Apes Part V [Part IV]: The Children of the Bomb

This chapter has been titled thus by Newton, as per the scan above of the first page of this story. However, it is the merely the five pages of Part IV which were left out of the printing of that chapter in Newton's Planet of the Apes #12. And to make matters more confusing, the reprint of the story doesn't stop there - it actually proceeds to reprint the bone fide Part V - or rather, the first 5 pages thereof - and omits the designation of Part V in that chapter as it has already been used. Yes, it's as confusing as that sounds, so let me illustrate with scans. This is from Newton Planet of the Apes #13: 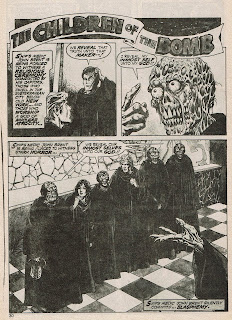 And this is from Marvel's Planet of the Apes #10: 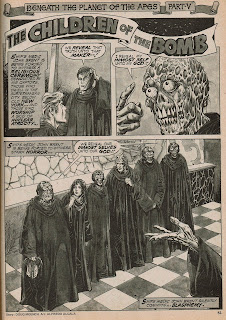 In other words, Newton have effectively contrived a new Part V which consists of pages from the original Part IV and Part V. Reading Beneath the Planet of the Apes in the Newton editions is a mug's game - seek out the original issues instead. However, the complete Kingdom On An Island Of The Apes is perfectly fine in Newton's Planet of the Apes #NN[19].

The poster in this issue is of The Man-Thing: 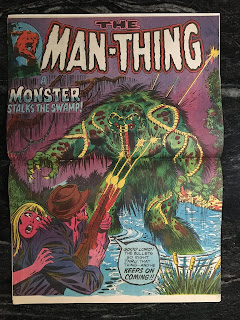 The contest expires 12 January 1975. Given this is the third consecutive issue in the series to be cover-dated November 1975, and the 12 January 1976 expiry date for the contest, it is quite possible this issue was delayed and published early December 1975.