This is the front cover to Marvel's Vampire Tales #1: 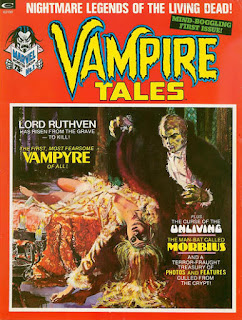 The image was reversed in Page Publications' Vampire Tales #1: 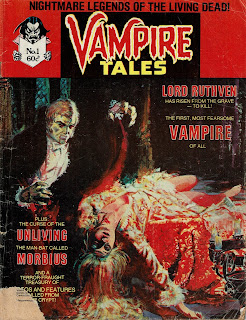 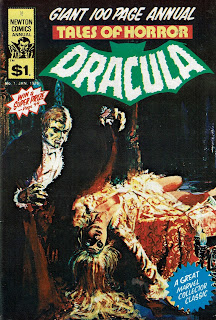 The contents of this issue are as follows:

Dracula Giant 100 Page Annual has a January 1976 cover date. This places it neatly between Dracula #11 (cover date December 1975) and Dracula #12 (cover date February 1976). I note however that the competition expiry date in Dracula #12 (21 February 1976) is a week earlier than the expiry date for the competition in the Dracula Annual (28 February 1976). I expect this is due to the longer shelf life of an Annual compared to a regular issue. but it is also symptomatic of problems in the Newton offices in December 1975/January 1976.

Consider also why it was necessary to publish the Dracula Annual in the first place. I mentioned in my previous post that Dracula #11 was the first of the new monthly editions with an increase in price and page count. The increase was significant - basically double the page count and price. Dracula #11 was lumbered with the stresses of both a page increase and a fortnightly schedule - it was the first monthly edition, but it filled the slot originally reserved for a 44-page fortnightly issue. Given the first two stories in the Dracula Annual are also the last two stories in Dracula #11, it appears likely that Fear Stalker and The Blood is Mine! were dragged into urgent service for Dracula #11 to help fulfil a higher page count at the expense of the next Dracula/Dracula Lives! issue scheduled for January 1976. This may have had a flow-on effect as those two stories were already prepared for the January1976 issue, at which point it was decided that in order to compensate for the duplication, extra pages would be added to the January 1976 instalment, which caused the page count to balloon to 100 pages, and voila!, a 100-page Annual was born! Pure speculation on my part, but it does account for the duplication of the stories and the interruption to the schedule of new, monthly numbered issues - and maybe it also accounts in some way for the contest dates.

Dracula #12 did indeed proceed to reprint Dracula Lives! stories - but that's a story for another blog post.
Posted by spiros xenos at 6:35 PM