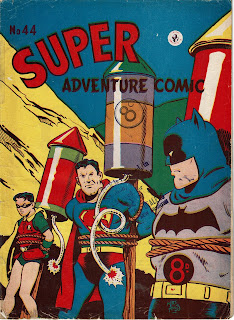 The cover to Super Adventure Comic #44 is stupid. I get that. But I love it anyway. I'm a soft touch for such Hart Amos covers, and that's as apologetic as I will get. And if you want to get all Freudian about it, I suggest you apologise too.

A curious point of interest in this issue is the illustration of the batmobile at the bottom of page 24: 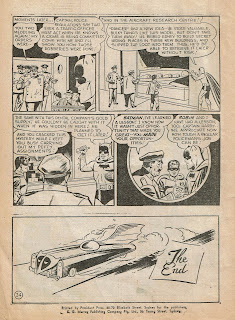 This appears to be an in-house Murray illustration. It is unsigned. It takes the place originally reserved for advertising the Superman television series in Batman #77 for the story Batman Pounds a Beat!: 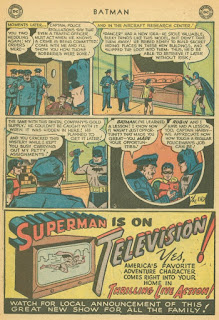 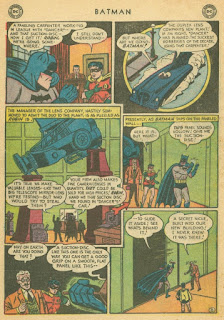 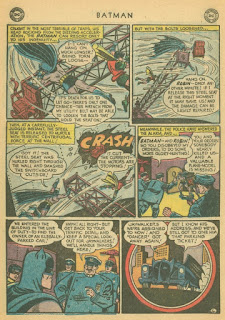 Either of these two images could have provided the template or visual cues for the illustration in Super Adventure Comic #44. Of course, this image of he batmobile may have been used in other Murray comics before this issue, but it's the first time I've seen it.

It is also worth noting that Batman Pounds a Beat! was reprinted along with the accompanying batmobile illustration in Colossal Comic #48. This is further evidence that the contents of the Colossal Comic series were largely drawn from the 1950's Murray issues.

Those 1950 covers are indeed a joy. In this case, Superman appears to be giving Batman an Oliver Hardy-like "Well, this is another fine mess you've gotten us into!" look.

Good pick on the Colossal Comic reproduction of the Batmobile illustration! While it could have been based on any one of a number of Batmobile shots, the illustration's very existence is a curiosity; why didn't KGM simply replace the American ad with either a local one, a house ad, or a Henry Boltinoff comic strip as was the common practice ? I wonder if this was a one-off or whether the illustration, or other local works, appeared in any other early KGMs? Something to keep a watch for.....