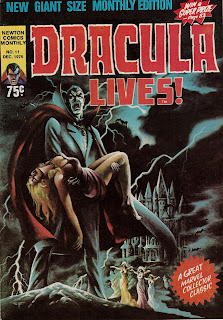 Dracula #11 is the first of the new 84-page $0.75 monthly editions, as announced in the letter column of this issue. As mentioned earlier, this schedule was to be thwarted for various reasons, resulting in only three more numbered issues in the series, published rather haphazardly over the next 8 months or so. (Two other Dracula issues were published by Newton in 1976 - an unnumbered issue, and a Giant 100 Page Annual, which would in part account for some of gaps... but I digress...).

The poster included in this issue is a modified black and white print of the cover on Newton's Doctor Strange #7. The rest of the issue includes in-house advertisements, a competition and a letter column.
Posted by spiros xenos at 4:23 PM