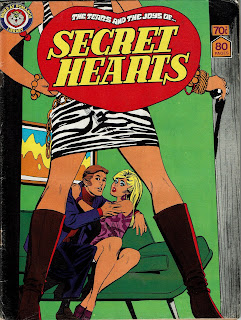 Secret Hearts is an interesting entry into the Murray Romance Library catalogue.

Secret Hearts was a long running DC series which provided material for many KG Murray romance issues, but to my knowledge was not itself a Murray title. The DC series ended in 1971 but in 1980 the title and masthead was adapted for this unnumbered one-shot issue.

The cover originally appeared on Secret Hearts #139. According to the GCD entry the cover does not match any story in the issue, and indeed, non of the stories in that issue appear in Murray's Secret Hearts.

However, the cover does match the lead story in Secret Hearts. Sister, Don't Steal My Man! was originally published in Young Romance #183, and quite closely the theme and plot of the cover. Note that speech balloons with references to "my best friend" have been omitted as the story concerned involves a sister.

I'm not sure why Murray was compelled to contrive a cover image for this story - I assume they reprinted both cover and story from Young Romance #183 before and I just haven't spotted it yet - but I do like the sense of an editorial hand being familiar enough with the material being published to go to the trouble of matching a cover with the contents.

This issue appears to have been published around the time the Murray Romance Library imprint was launched c. February 1980.
Posted by spiros xenos at 1:10 PM