The Amazing Spider-Man #1: The Newton edition

The Amazing Spider-Man #1 was the first comic book published by Newton Comics, on 31 May 1975: 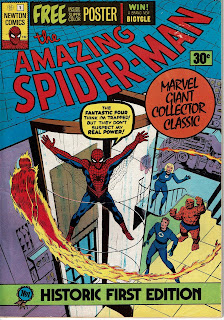 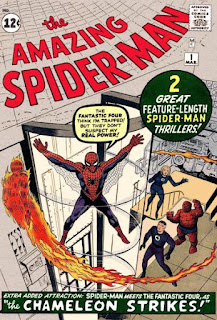 I know the Newton edition is incorrectly coloured but I confess I nevertheless find it very attractive. No doubt nostalgia's blunt critical edge plays a part in my aesthetic assessment, but there you go. I also appreciate the neat non-intrusive manner in which the Newton-relevant text replaces the Marvel text in the circular text box and the bottom banner. It is  much less intrusive than modifications on other such Australian editions of American comics.


The Uncanny Threat of The Terrible Tinkerer!, originally published in The Amazing Spider-Man #2, May 1963

Duel to the Death with The Vulture!, originally published in The Amazing Spider-Man #2, May 1963

I have deliberately referred to the first story as Spider-Man [Freak! Menace!] The title of this story is officially indexed solely as Spider-Man. However it has appeared as Spider-Man Freak! Public Menace! in some fan publications, which serves the practical purpose of distinguishing it from the virtually identically titled Spider-Man! in Amazing Fantasy #15.


The version of this key story as published by Newton is incomplete. This is a scan of the first page, as published on the glossy inner front cover of the Newton edition: 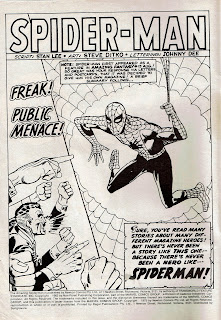 Compare this to a scan of the original page: 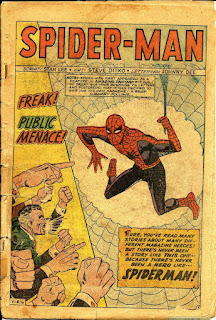 In order to accommodate the indicia, the Newton edition has been cropped by just over an inch and a half at the bottom of the panel beneath the text caption, resulting in the deletion of a portion of the art and, arguably more importantly, the job number. The space between the title and the credits has also been reduced resulting in some loss of art.

As a matter of interest, consider how Marvel has reprinted this page. Here's a scan of the reprint in the recent True Believers: The Amazing Spider-Man #1: 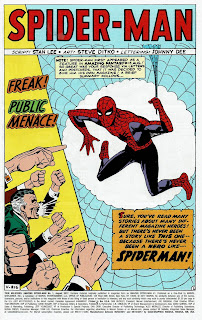 This is how the same page appears in my copy of Marvel  Masterworks Vol. 1 (fourth printing): 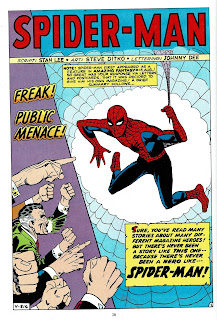 Apart from the differences in the colouring, which is a significant issue itself, note the hyphenated Spider-Man  in the bottom caption. This has been 'corrected' in the ostensibly archival  edition. For all the scorn I heaped on Newton Comics for the lack of hyphenation in their advertising, I am glad the Newton page is untampered with in this regard.

It is also incomplete in another sense. As originally published this is a 14-page story in three parts, however the last page of Part 3 has been omitted in this edition. This is the final page in the Newton edition: 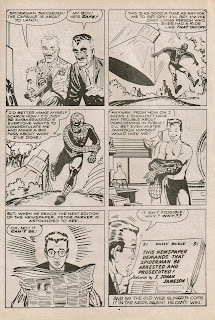 This is the missing Page 14 as it appears in the True Believers edition: 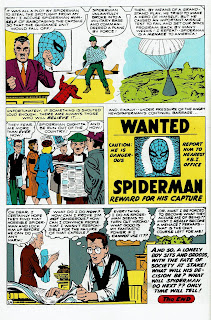 In tacit acknowledgment of their surgery, the Newton editors insert a short concluding statement - "And so the old web slinger cops it in the neck again! He can't win.", which to some degree mirrors the statement on the final page of the original issue which reads, in part: "And so, a lonely boy sits and broods, with the fate of society at stake!" At least the existentialist sentiment is intact, even if the Newton prose is more prosaic than the original.

There are two in-house advertisements for forthcoming issues. The first is for Planet of the Apes #1, scheduled for publication the following week on 7 June 1975, and The Fantastic Four #1, advertised as on sale a week later on 14 June 1975.

Newton Comics proudly promoted the Free Super Color (sic) Posters on the front covers of their issues, and the honour of the first such poster went to Captain America: 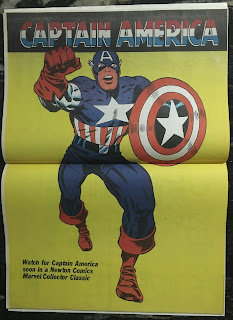 The Captain America poster, featuring an iconic image of the hero suggested a Cap series was on the horizon. He would appear shortly as a backup feature in The Incredible Hulk as well as in The Avengers, but his own series would not be forthcoming until the end of the year.

This issue also carried an introduction to Newton Comics in the guise of "A personal message from Stan Lee" which also introduced Gentle John: 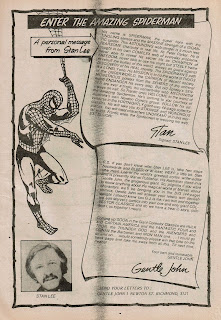 It was also employed to advertise the Spiderman Identity Contest on the rear cover: 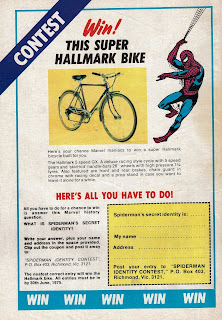 Don't get me started on the hyphen...

The Amazing Spider-Man #1 was advertised prominently in the Sunday Observer. On 25 May 1975 an advance notice was printed at the bottom of the comics supplement:

On 1 June 1975 the following advertisement appeared: 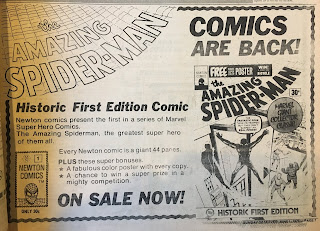 It was still being advertised three weeks later. This advertisement was in the newspaper from 22 June 1975:

The Spider-Man image at the top of the advertisement hails from the splash page to the first story in the issue - see samples top of post.

Newton had in fact published Spider-Man before, courtesy of the comics supplement in the Sunday Observer, which also carried other Marvel properties. However this issue inaugurated a substantial line of comic books which would gain momentum over the next few months until it faced a few significant bumps some six months later, suspending publication for a time, and fizzling out less than two years after launching. Indeed, Spider-Man would return to the Sunday Observer as a black and white strip in a few months time.