Doomsday Album #14 has been indexed on both AusReprints (by my friend Mark Muller) and on GCD (by a number of people), but for some reason the cover image is missing, so here it is for all concerned: 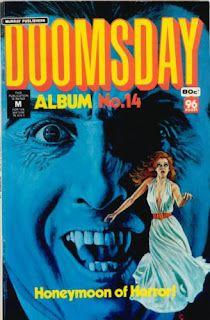 I've been searching for the source of the cover image with no luck, other than noting it is clearly Christopher Lee in blue.

Given this is two separate images my guess is the distressed damsel in the foreground has appeared on another cover, but again, no luck so far identifying any previous source, other than the fact she appears to be similar in appearance and art style to the woman on the cover of Doomsday #24: 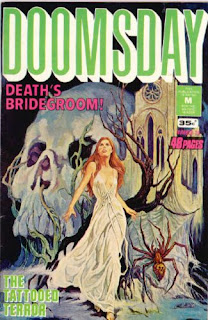 The artist for this issue has not been identified. They may or may not be linked, but I note in passing that many of the covers for Doomsday and Doomsday Album appear to have the same models as reference for their covers, as do many of the Gredowns. A gallery is in order,

Anyway, I look forward to both of these mysteries being solved.
Posted by spiros xenos at 1:50 PM