Dossier Negro and the Gredown connection

Black Dossier was a pioneering Spanish horror series which began in 1968 and lasted 217 issues until it folded in 1988. Although it published its share of American horror comics from publishers such as DC, Warren and Skywald (including some covers), it's best remembered for the Spanish stories and artists.

Some of it found its way into Gredown publications, most likely from the Second Period 1974-1979.

I'm just beginning to acquaint myself with this series, and I'm keen to identify more covers and stories which turned up in Gredowns. I'm hoping at the very least to identify some of the cover artists and their distinctive styles. I can see I'll be relying on Google Translate more than I ever have before.

To begin with, here's a match that popped out to me immediately: 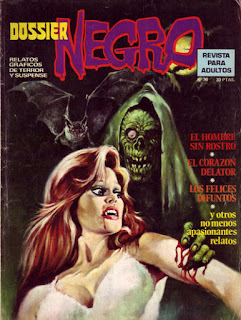 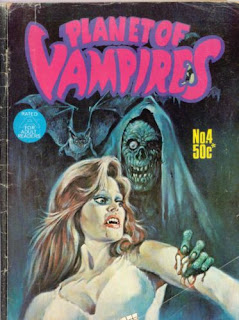 Despite the cover they do not appear to share the same contents. Not that this was really expected, but I had a go at translating the four titles on the cover of Dossier Negro #76 , and there do not appear to be matches to Planet of Vampires #4. Indeed, Planet of Vampires #4 appears to me not to contain Spanish material, but rather mainly reprints of redrawn pre-code stories as published in the U.S in the late '60's/early '70's.

The Wiki entry mentions the Second Period was published by Garbo Editorial. This is not one of the Spanish publisher credits I recognise in Gredowns, such as Selecciones Ilustradas or Editorial Vilmar. However, the timing cannot be coincidental - a new Spanish publisher in 1974, and material appearing in a new range of horror comics in 1976.

In fact, I'm pretty sure I've spotted some Murray covers which appeared first on Dossier Negro.

Another connection to be teased out.
Posted by spiros xenos at 8:53 PM