The Yaffa/Page Fantastic Four series was launched concurrently with the The Amazing Spider-Man series, and followed the same format as that series’ first two phases. Between 1977 and 1980 there were 24 issues published comprising issue numbers 187-222/223. 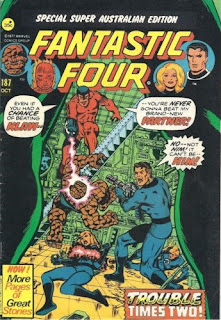 Volume 1 ran for 11 issues, numbered 187-197. These issues were published monthly and are cover-dated October 1977-August 1978. They are 36-page black and white issues with colour covers. They began with a $0.35 cover price which was raised to $0.40 by the middle of 1978. They typically feature two stories in each issue - the main cover feature from the respective US edition, and a vintage Lee/Kirby Fantastic Four story. They are recognisable by the Special Super Australian Edition banner across the top of the cover. 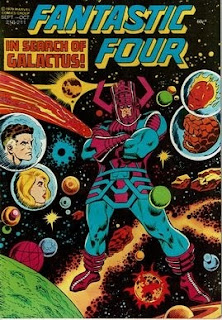 Volume 2 ran for 13 issues in a new bimonthly format. The issue numbering continued from Volume 1 but had two issue numbers per issue eg. 198-199 and two cover dates eg. Sep-Oct. These are 60-page black and white issues with colour covers and a $0.60 cover price. This run is cover-dated Sep-Oct 1978 – Sep-Oct 1980. These issues also reprint the main features from the respective US editions, with one of the issue covers on the front, and typically featuring a black and white reprint of the other US edition cover inside. As per Volume 1 these issues feature a vintage Lee/Kirby Fantastic Four story as the backup feature. The first issue of this volume also sports the Super Special Australian Edition banner but this is dropped for the rest of the run.
There was no Vol. 3 for Fantastic Four – and as you may have guessed from my tone re: The Amazing Spider-Man Vol. 3, this is no great loss.