Doomsday Album #6 and the Merlin photo cover: It's a Mirakel!


Can I be both right and wrong?

Years ago I claimed that the photo cover of Doomsday Album #6 was based on the splash panel to The Demon #1, featuring Merlin, which was also the first page in this issue. See below for the evidence: 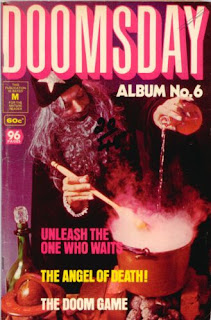 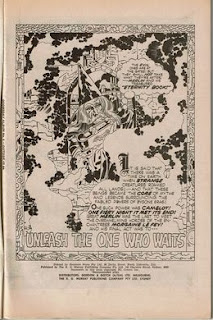 As AR commented at the time, "It's interesting these guys would set up a photo-shoot for the cover of a cheap reprint comic... A conventional cover would be less trouble, surely, not to mention far less expensive."

As it turns out, AR's scepticism was justified. Murray did not set up an expensive photoshoot. The image had been published earlier on the cover of Dan Shocker's Macabros, a pulp novel series published in Germany in 1976: 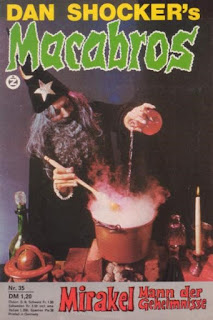 I found this image on James' entry for Doomsday Album #6 on AusReprints.net. That's some fine sleuthing!

I don't know how or if the Macabros image is related to the Merlin story. Being a pulp series it would not, presumably, be reprinting the Jack Kirby comic.

The titles don't help too much either. I don't need Google Translate to tell me "Macabros" means "Macabre" and "Mirakel" means "Miracle", but it does help informing me that "Mann der Geheimnisse" translates as "Man of Secrets". But this doesn't shed any light on any connection to "Unleash the One Who Waits!"

So, I stand by my claim that the photo cover for Doomsday Album #6 is directly related to the lead feature, but my implied assertion that it was solicited or produced by Murray for this issue isn't supported by the evidence.

But it does suggest a rather firmer editorial hand by Murray at this stage of the game than is often otherwise evident or assumed.

And I'm quite happy to be both right and wrong!
Posted by spiros xenos at 1:18 PM

Fascinating stuff! Interesting that KGM were sourcing covers from o/s, just as Gredown did. Of course, just because the cover originally appeared on a German pulp doesn’t mean that it was necessarily German in origin; it may well have been used on other European publications as well.

Whatever its origin, it would be interesting to know just how KGM came to source it and licence its use. So often when I see Australian reprints of older, non marvel / DC material, I find myself wondering “How the hell did they get the rights to this stuff, and who supplied the source material?”

BTW, when I visited Germany for the first time last year, I was pleasantly surprised to find that garish horror and SF pulp were still being published, and could be found tucked away in the newsagent racks. I didn't buy any, though - I was too busy buying locally published comics. t least I could follow the pictures in those!