Yank me any way you want: Popular Yank Comics #74

You get the drift - Ayers and James Pty. Ltd. (and Frew, and likely others) flogging U.S reprints as the real deal in the 40's and 50's during the wartime embargo. You can read a bit more about this syndrome on Kevin's blog.

I happen to have a copy of one of these comics lurking in the Junkyard -  Popular Yank Comics #74: 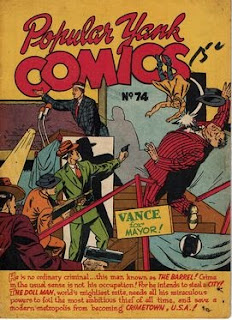 The cover is a slightly modified reprint of the splash page to "Crimetown, U.S.A.!"