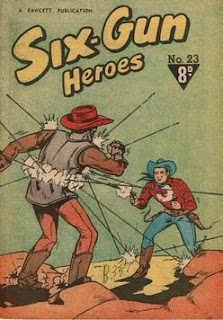 Six-Gun Heroes #23 is "A Fawcett Publication" - an Australian edition of material originally appearing in Fawcett westerns between 1950-52, and published locally by Larry Cleland Pty. Ltd. c.1952.

The main contents feature Tom Mix, Monte Hale and Bob Colt, with a couple of gag strips (Prankish Pat, Bronko Betsy) and a couple of advertisements. 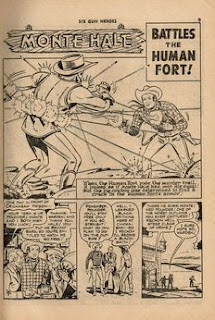 The cover is a redrawn version of the splash panel to the second feature "Monte Hale Battles the Human Fort!", which originally appeared in Monte Hale Western #58, March 1951. 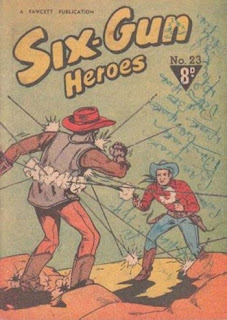 I also note my copy is much cleaner than the scan on James' site (see above). I didn't even notice the small B35 written in pen near the bottom of the cover of my copy, but there's no missing the scribble covering almost half the copy scanned on AusReprints.com. Now, I'm not saying I would trade my copy for that one, but if I'm going to have a defaced cover, I do prefer a bit of personality to be imbued in my marginalia. Then again, that's something of a personal fetish of mine.
Posted by spiros xenos at 11:19 AM