Between 1977 and 1981 Yaffa/Page Publications published 32 issues of The Amazing Spider-Man comprising issue numbers 173-209. These issues were based on the US editions of the series and were published in three distinct phases which, for the purposes of this overview, I will refer to as Vols.1, 2 and 3.
Vol. 1: 1977-1978 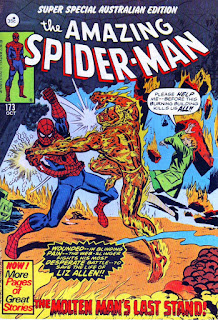 Volume 1 ran for 11 issues, numbered 173-183. These issues were published monthly and are cover-dated October 1977-August 1978. They are 36-page black and white issues with colour covers. They began with a $0.35 cover price which was raised to $0.40 by the middle of 1978. They typically feature two stories in each issue - the main cover feature from the respective US edition, and a vintage Lee/Ditko Spider-Man story. They are recognisable by the Super Special Australian Edition (sometimes Special Super Australian Edition) banner across the top of the cover. 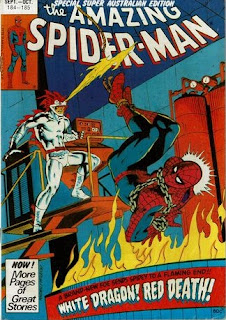 Volume 2 ran for 13 issues in a new bimonthly format. The issue numbering continued from Volume 1 but had two issue numbers per issue eg. 184-185 and two cover dates eg. Sep-Oct. These are 60-page black and white issues with colour covers and a $0.60 cover price. This run is cover-dated Sep-Oct 1978 – Sep-Oct 1980. These issues also reprint the main features from the respective US editions, with one of the issue covers on the front, and typically featuring a black and white reprint of the other US edition cover inside. As per Volume 1 these issues feature vintage Lee/Ditko Spider-Man stories as the backup feature. Some of these include features such as pinup pages or cover reprints from the era. The first issue of this volume also sports the Super Special Australian Edition banner but this is dropped for the rest of the run. 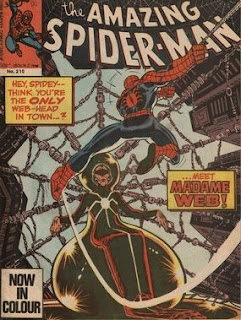 Volume 3 ran for 8 issues and again there was a new format. These are 32-page issues with a $0.50 cover price. The page count and cover price is lower than Volume 2, but the production values are also of a noticeably lower standard. Whilst they are larger in dimension – about half an inch wider than the Volume 2 issues – the paper and printing quality is poorer. The paper stock for the covers is no different to the newsprint-style paper used for the interior, which leads to a muted, washed-out effect on the colour covers. And the interiors are a mix of colour and black and white pages. Typically the main feature will begin in colour for the first 8 pages before it is interrupted with maybe 9 pages of a partial reprint of a vintage Lee/Ditko Spider-Man story, which is itself crudely cut short to be continued next issue, before the main feature picks up where it left off on page 8 in black and white, and reverting to colour for the last 8 pages, finishing up on the rear cover. A real mess.
The precedent for this format appears to have been set by Page Publications’ competitor Murray Comics about a year earlier. In 1980 some series eg. Superman, Batman and Robin converted from 32-page full-colour regular-sized issues to oversized 64-page issues with a similar mix of colour and black and white pages. For example Batman and Robin #16 boasts “64 action pages with 30 in super colour” on the cover, and as demonstrated on James’ index, the first 16 and last 16 pages are colour whilst the middle pages are black and white. Similarly to the Page issues the paper stock on the cover is the same as that used for the interior pages – no gloss here. At least the Murray editions don’t mess with the order of the stories – one follows neatly after the other, even if part of the story is colour and the rest in black and white.

Of course the change was driven by economic factors, but I wondered whether the change in format and printing quality may have been related to a change in printer, but on closer inspection, all the Yaffa issues were printed by Rotary Colorprint Co. Pty. Ltd., Sydney.
(The Murray issues were printed in New Zealand by Comprint. K.G. Murray comics had been printed by Kenmure Press Pty Ltd., 50 Derby Street, North Lidcombe, 2141 for a long time, but the All-Color Planet and Murray 32-page issues were printed by Times Printers SDN, BHD., Singapore before they switched to Comprint with the new format, which suggests a causal connection – but that’s another story).

Dating Vol. 3 accurately is more difficult than Vols. 1 and 2, which had the advantage of cover dates. All the issues of Vol. 3 have a 1981 date in the indicia. So although the numbering continues from Vol. 2, which ended cover-dated Sep-Oct 1980, there appears to be a gap of at least two month between # 208-209 and #210. In lieu of cover dates I look for other indicators for a date – dates on advertisements or competitions; stamps or marks from newsagencies; notes by previous owners/collectors; alterations in logos or cover prices which can be crosschecked with confirmed dates on other issues – anything at all to latch onto.
In this instance the information I have muddies the water more than it clears it. For example, given the contents of #210 continue sequentially from the end of Vol. 2, I would expect to find that it appeared fairly soon after #208-209. Even allowing for a change in format, given the material was presumably on hand, I’d expect a publication date of January or February 1981. However, I have to hand a copy of #210 with “4” written in pen on front cover, which suggests the issue was on the stands in April. If this is the case, given a regular monthly publishing schedule, all 8 issues of Vol. 3 could have been published in 1981, ending neatly in December 1981. But I also have to hand a copy of #215 which has “11” written in pencil on the cover. If this is the November issue, it means the final three issues were published within two months of each other. Possible, but if I’m engaged in speculation and guesswork, it is neatness and orderliness which makes for a compelling case, not rough edges. And ignoring such markings doesn’t help too much either as 8 issues don’t go into 12 months especially neatly, particularly given the precedent of Vols. 1 and 2. So all I can say with confidence regarding Vol. 3 is that all issues appear to have been published in 1981 on an unspecified schedule.

The new format, which no doubt relied on a perceived value for money, what with the full colour pages and the lower cover price, could not save this series from cancellation. A rather tatty end, all things considered, for what was no doubt regarded as the flagship title of the Yaffa/Page Marvel line of comics.

Postscript: On reflection I should probably have referred to various Phases rather than Volumes for this series overview. Volume suggests an indicia designation, which is not the case, and can lead to confusion.
Posted by spiros xenos at 3:05 PM