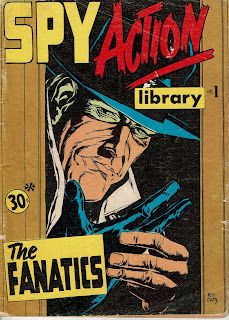 The cover is by Keith Chatto and, as was often the case with his covers for Yaffa, it is based on the source material - in this case, S.A.T.A.N. Picture Library #6: 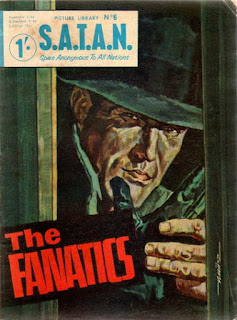 The Fanatics was also published by Yaffa in Spy Stories Picture Library #3: 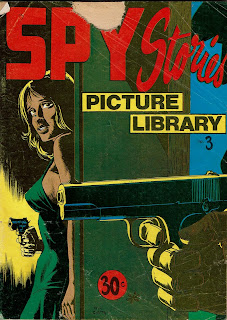 Again, as was often the case, Chatto was tasked with supplying a cover image for recycled material for which he had already provided a cover. There is no similar panel in the comic to suggest he swiped/tailored it for his purposes.

I say he had already supplied a cover, but I'm not sure of the publication sequence of these issues. I can usually tell which edition was published first by the cover price. In this instance each edition has a $0.30 cover price, leaving me to make deductions. Common sense dictates that Spy Action Library #1 was first out the gate, given the cover is based on the source material.

I must admit I tend to be a bit frustrated and sceptical about the accuracy of the date codes on Yaffa comics. I think they're useful for indicating a year, but less accurate regarding the month of publication. My impression is that they tend to be too generic or 'long term' compared to the date codes on  K.G. Murray Comics. I may change my mind about this as I become more familiar with the early/mid-'70's Yaffa catalogue. I don't yet have a handle on this period as I do on Yaffa's Marvel period.

Oh, and I look forward to spotting another issue recycling the Fanatics!