Navy Warfare #'s 2, 3 and 4: A different kind of triplicate Chatto

So we've seen Keith Chatto provide multiple versions of a cover for the same story, and we've seen the same Chatto cover recycled for two issues in the same series, not once but twice, but how about the one cover being used three times on three consecutive issues of the one series? I give you Navy Combat #'s 1, 2 and 3: 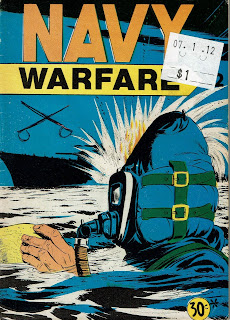 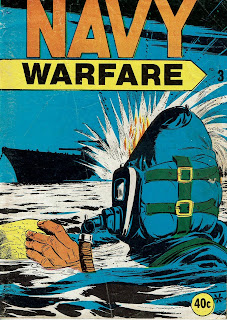 It is possible this image is a swipe from a UK source, but if it is, I haven't identified it yet. It isn't based on a panel from either The Unknown Warriors nor The Burning Ocean, so it would appear this is an original conception by Chatto.

I haven't seen a copy of Navy Warfare #1 so I don't know what is on the cover, but you can guess what my perverse wish is...
Posted by spiros xenos at 12:10 AM