The Invaders #7: The Yaffa edition

As I suspected when I first posted my cover gallery of Yaffa's The Invaders a couple of months ago, there was another digest issue in the series to unearth - and here it is, The Invaders #7: 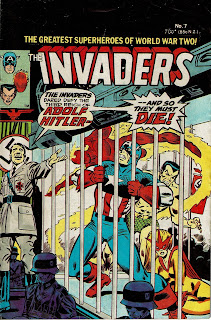 
The cover is from The Invaders #19, and the issue reprints the contents of The Invaders #'s 19-21, including the Sub-Mariner backup features from the Invaders #'s 20-21. It appears the splash page is missing from the first story, War Comes to the Wilhelmstrasse.

The Invaders series ran for 41 issues through 1979. This means there was plenty more U.S material to be published in local editions. As per my cover gallery, the next issue I'm aware of is the unnumbered edition from 1982 recycling the first issue of the series. There is scope for another Yaffa 'tall' digest issue to have been published in this series. I'll let you know if one turns up.
Posted by spiros xenos at 4:55 PM

Uncle Adolf appears to be singing to the Invaders - perhaps in the style of Wagner?