Federal Comics' Iron Man #9 dropped into the Junkyard this morning, and I just want to note a few things which have struck me about this issue on first inspection: 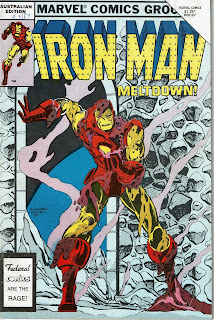 1. There is no issue number on the cover, however it says Iron Man #9 in the margin of the first page.

2. The banner across the top of the cover says Marvel Comics Group. The black and white Federal comics which had a banner across the top were variations of Federal Comics Group or Federal Presents (the colour issues boasted All Color or somesuch). I don't recall another Marvel Federal issue with a Marvel Comics Group banner. I'm not saying this is the only issue to do so - presumably there are more - but it does represent a significant change at this late stage of the game.
3. The date pencilled on the cover is F 3/87. This is the last issue in this series, and it is clearly not published in 1987, but early 1986. I'm not sure what the F stands for - Federal?

4. The advertisements in this issue suggest it was published in January/February 1986. But...

5. A few months ago I noted that there were two different Comic Comments... letter columns published in Federal Comics. This is the letter column in this issue: 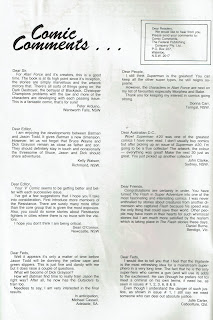 This letter column is a variation on #2 as sampled in my earlier post - identical, except for the final letter. I'm not suggesting this variation is exclusive to Iron Man #9 - I suspect it's in a number of issues, and that I missed it the first time I inspected the letter columns. At any rate, this means there is a third letter column to add to the first two.

Having now completed my run of this series I'll take some time next week to present them all here, and see if any new insights to dates and formats are revealed in the review.