Planet of the Apes #6: The Newton edition 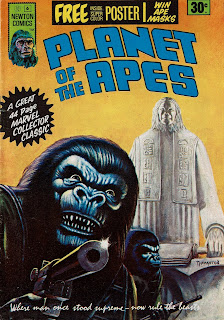 This portion of the chapter is 9 pages only, continuing from the previous issue: 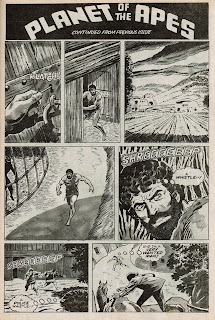 As per Planet of the Apes #5 this chapter is non-paginated. It includes a generic title panel at the top of the page but not a specific chapter title. The insertion of the title panel results in the unfortunate cropping of the bottom tier. Taylor is barely visible in the sixth panel whereas in the original page there is a full head shot:

The poster is of Captain Marvel with Newton's own colour scheme: 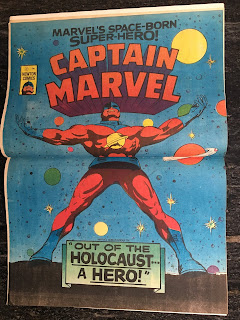 The contest in this issue expires 6 October 1975.


There are a number of in-house advertisements, all of which are advertised as being current ie: August 1975 issues. One of these is Conan the Barbarian #1. This had previously been advertised as being released 30 August 1975. If this schedule was adhered to it would suggest this issue was published very late in August 1975. This would mean that after a rash of issues in quick succession in July and early August 1975, there was a longer than expected wait for this issue. However, it is also possible Conan the Barbarian #1 was published a bit earlier than initially announced. There is a regular two week gap in the contest dates between this issue and the previous issue, which would suggest a publication date for Planet of the Apes #6 closer to 16 August 1975 rather than 30 August 1975. That's as close as I can get to a publication date at this stage.

Update 9/12/2018: A further consideration of the publication dates in discussion of Planet of the Apes #7.
Posted by spiros xenos at 9:25 PM