Planet of the Apes #7: The Newton edition 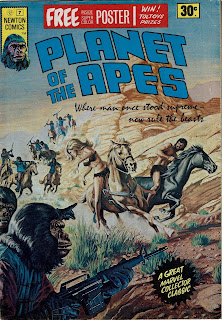 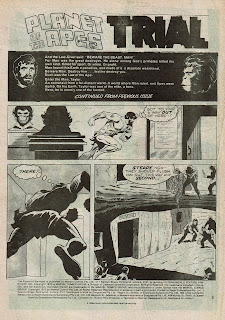 This continues where Manhunt! left off, but is retitled Trial, and includes the blurb seen in some previous issues. The title panel and blurb are included at the expense of the top tier of panels on page 71 of Marvel's Planet of the Apes #3. It's a shame as the title panel is misleading - The Trial is actually the title of the next chapter, which begins in this issue a mere two pages later: 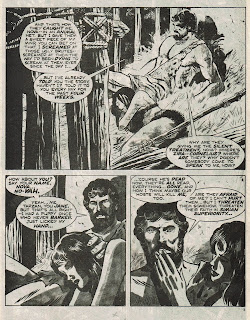 Having been pulled into duty on page 3, the title of this chapter is omitted from the page as it appears in Marvel's Planet of the Apes #4. This chapter is otherwise reprinted in full, apart from the note at the bottom of the last panel which advises that the next chapter follows rather than appearing in the next issue.

Only the first 9 pages of The Planet of the Apes: Into the Forbidden Zone chapter are included in this issue.

The poster in this issue featured the cover to Doctor Strange #4: 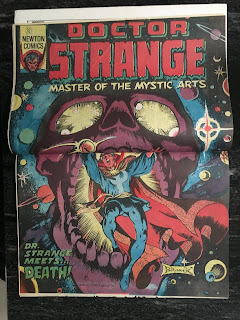 Dating this issue, as per the last couple of issues, is a bit tricky.


I also note that the letters column in this issue forecasts the pending release of the Swap Cards, without advising a date.

As further data comes to hand I hope to finetune the timeline, but I think this is a good provisional guide.


If you follow the link above to Doctor Strange #4 you'll see that ten years ago I was a nostalgic rather than a committed Newton Comics collector. Around two years ago I found myself becoming more interested in the Newtons - as evidenced in my posts - and I am now only a few issues short of a complete run.