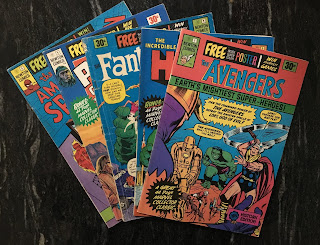 By all accounts Newton Comics was launched with an intended fortnightly publication schedule. In the editorial pages of The Avengers #1 John Corneille notes "at present we are printing five titles - all published fortnightly... they are: The Amazing Spiderman (sic)…; Planet of the Apes; the Fantastic Four; The Hulk... and The Avengers." The editor ruefully adds "except for The Avengers which, for some strange reason, appears every three weeks". Corneille  has listed the titles in order of publication. This is how the releases panned out:

As you can see, the first titles were actually launched incrementally over a five week period. By the time The Avengers #1 hit the stands, the second issues of the first two titles joined the cavalcade. From this point on these series would indeed be released fortnightly - the affliction affecting The Avengers notwithstanding - with a range of new titles such as Doctor Strange, Conan the Barbarian and Dracula joining the stable over the next couple of months.

Newton Comics thus built momentum over a short period of time, increasing their presence on newsagency racks and shelves with both a growing roster of titles and an increased publication frequency. There is some evidence to suggest that this strategy was not wholly intentional. It appears, for example, that there were unanticipated delays in the publication of The Fantastic Four #1 and The Amazing Spider-Man #2.

Regardless, once the floodgates opened, Newton Comics forged a formidable presence in the small Australian marketplace, and it must have caused other publishers to take stock of the situation. Newton Comics were a brash and flashy new player on the superhero comics scene previously dominated by KG Murray, by this time an institution in the field. With their TV advertising, colour posters, t-shirts, competitions, swap cards and enthusiastic cultivation of fandom, Newton played David to Murray's Goliath, and surely must have furrowed the bushy eyebrows of their staid competitor who still advertised stamp collections.

I don't think it's pure coincidence that by the end of the year KG Murray rebranded their comics with a new Planet Comics logo, and converted many of their longstanding titles from the generic ilk of Tip Top Comic Monthly, Wonder Comic Monthly, All Star Adventure Comic and All Favourites Comic - some of which had been active since the 1950's and early 1960's - in favour of character-centric titles such as Batman, Wonder Woman, Superboy and Lois Lane. It was a facelift rather than radical surgery and, as things turned out, Murray need not have overreacted - the new kid on the block would flash and burn rather quickly.

The photo above is of my copies of the first issues fanned out on my kitchen bench. I would have loved to present a photo of a genuine newsagency display c.June 1975, but alas...
Posted by spiros xenos at 8:33 PM

I remember those TV ads spruiking the sales of Newton Comics with the voice of Australian actor Gus Mercurio quite well on Adelaide TV. Quite an oddity for its time - or ANY time for that matter! NO comic franchise has advertised its product on TV to my knowledge

Yes. I honestly don't recall seeing those tv ads myself but I do remember Newton Comics being promoted on Cartoon Corner, the show hosted in the afternoons after school by Daryl Somers and Ossie Ostrich. My memory is that they held up copies and spoke about them. Memory can play tricks on us, and it's a long time ago, but that's what I remember, so if I'm wrong... The show screened the 1960's Spider-Man cartoon - I don't recall whether this coincided with the Newton period, but it was certainly one of the revolving features on the show in the mid-70's. Thinking about it more, I'm not sure whether it was on Channel 9 or Channel 0/10. I would need to check old TV guides to settle this question for myself.