The Incredible Hulk #1: The Newton edition 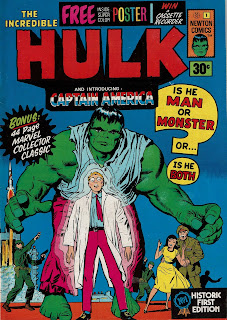 The cover image originally appeared on the cover of The Incredible Hulk #1, May 1962.

This issue was advertised in the Sunday Observer 22 June 1975: 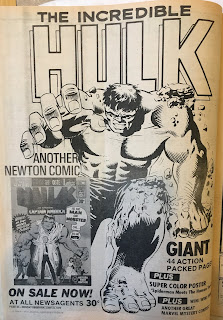 The advertisement includes the front cover of the new title but is overshadowed by the image which would shortly adorn the cover of The Incredible Hulk #2.

A pre-production image of the front cover was published in The Amazing Spider-Man #2: 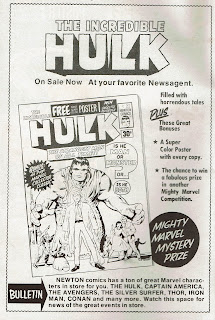 The Captain America support feature title is missing from this version of the cover. Captain America was advertised in the poster in The Amazing Spider-Man #1 as appearing "soon" in Newton Comics. He would debut for Newton in this issue and continue in the support slot sporadically until being promoted to his own title in December 1975.

[--This World Not His Own!] Origin How a Man Became The Hulk!, originally published in The Incredible Hulk #102, April 1968

A Titan Rides the Train!, originally published in Tales to Astonish #63, January 1965

The Horde of Humanoids!, originally published in Tales to Astonish #64, February 1965

The Hero That Was!, originally published in Captain America #109, January 1969

Origin How a Man Became The Hulk! is a 2-page feature: 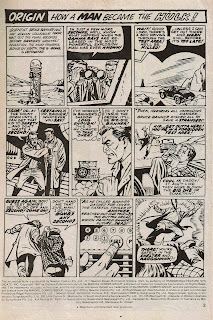 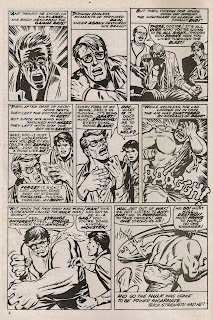 These two pages originally appeared in --This World Not His Own!, the lead story in The Incredible Hulk #102, the first issue in the relaunched self-titled series. The story itself continues from Tales to Astonish #101, and embedded in the story is the origin of The Hulk as told by Oldar the Oracle. Here's a photo of a two-page spread of the two pages above as they appear in Essential Hulk #2: 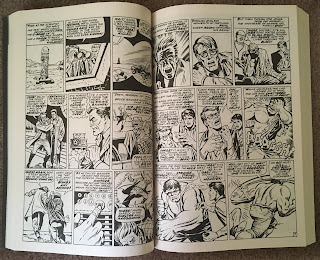 As you can see they have been modified in the Newton printing. The Newton print has a new title, and the verse narration in the first caption has been replaced by contextual scene setting relevant to the origin. The title and script appear to be written by Newton staff - probably John Corneille. The bottom tier of panels has been cropped. Concluding text is inserted in the final panel on the second page. This is cribbed from the end Oldar the Oracle's narration in The incredible Hulk #102. Here's a photo of the panel in question as it appears in Essential Hulk #2: 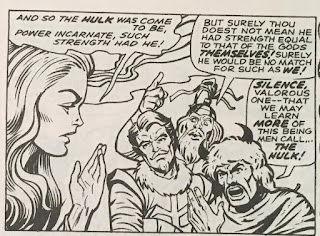 Having dealt with the origin, the issue then presents two Hulk features which originally appeared in consecutive issues of Tales to Astonish. The Horde of the Humanoids! is a 10-page story reprinted as an 8-page story in this edition. The 7th and 8th pages are omitted. 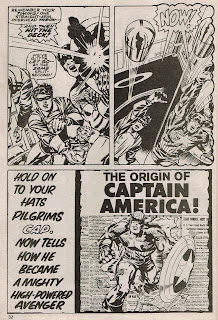 This is the same page as scanned from another Australian reprint, Page Publications' Captain America #4: 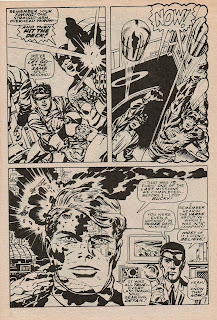 The bottom panel has been replaced in the Newton edition by a reprint of a portion of the cover to Captain America #109, along with text in Marvelese, in order to introduce the origin component of the story without any of the linking passages to the flashback sequence. The bottom panel of the fifth page and the whole of the sixth and seventh pages are omitted in the Newton edition.

The last two pages of the story are also omitted. Here's a scan of the last page of the Newton edition: 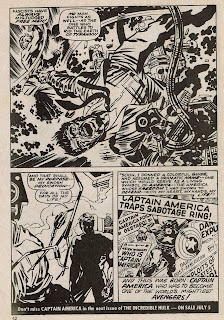 Newtonese concludes the story and also advertises the next Captain America story as appearing in the next issue of The Incredible Hulk. It doesn't.

Both The Hulk and Captain America origin stories presented in this issue were reused with variances in Newton's Origins of Great Marvel Comic Heroes, an issue which warrants its own detailed indexing.

The poster in this issue is titled The Amazing Spider-Man and The Human Torch: 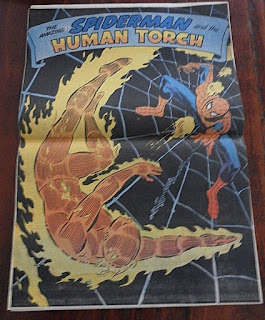 This image is adapted from the splash page to Have Yourself a Sandman Little Christmas! as published in Newton's The Amazing Spider-Man #2: 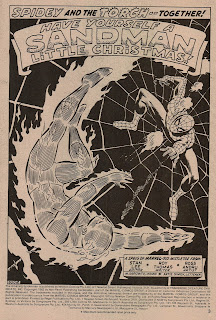 The contest in this issue is as per The Amazing Spider-Man #2 and renamed Hulk's Identity Contest, with the same expiry date.

Thanks to Mark Muller for identifying the source of the Hulk origin story and providing photos from his Essential Hulk #2, and to Mark Cannon for following up some leads for this entry.