The Newton Comics Supplement in the Sunday Observer

According to Wikipedia Australian television stations moved to colour in March 1975 with the slogan March First into Colour.

The next day a colour revolution on a much smaller scale occurred in the grimy Sunday Observer tabloid.

Months before Newton Comics launched their line of comic books a notice in the Sunday Observer 23 February 1975 heralded the launch of Marvel Comics in strip form:

In early 1975 the Sunday Observer contained a supplement for kids titled Fun World which included the Fun World Comics section: 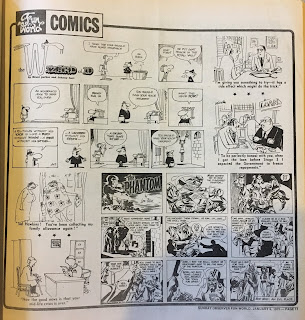 Fun World Comics featured humour and adventure strips as per the above sample from 5 January 1975. The New Color Funday headline promised an extensive revamping of the comics section with bold colours as well as the Marvel super heroes - although one might have wondered who in the hell the "Favorite Four" were...

The first instalment was scheduled for 2 March 1975 and as young readers eagerly turned the pages (past the tits and the diatribes against Gough Whitlam) this is what they saw: 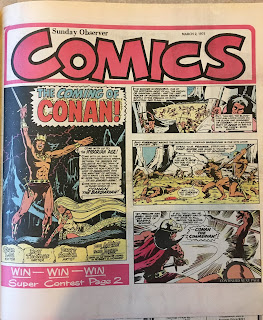 This was certainly a vibrant, full scale refurbishment of the previous iteration of the comics section!

This was a an 8-page supplement and the Marvel characters typically featured in half of the pages - the first three and the back page. The rest of the pages had the likes of The Phantom, Flash Gordon, The Wizard of Id, Mickey Mouse and others.

Here's the rest of the Marvel pages from the first instalment: 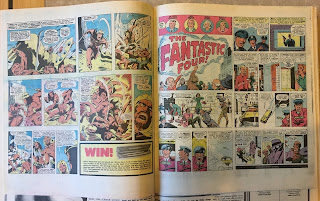 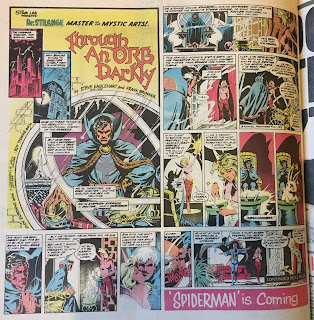 I took these photos from the bound copies of the Sunday Observer held in the State Library of Victoria. It is an incomplete collection but I have taken photos of the editions available and I will post them on the blog in due course.

The Marvel properties continued weekly in the supplement until 18 May 1975. The following week the forthcoming comics were advertised in the Sunday Observer and the comics section of the newspaper began to slowly revert back to its blander black and white iteration.

The Spider-Man strip did return to the newspaper in October 1975 and ran until January 1976, and in this period there was a greater synergy between the comics section in the newspaper and the comic books themselves - but I'll detail all of that in a separate post.

It occurs to me that the 'missing' strip is Planet of the Apes. As this was such a prominent title for the comic books its absence from the Comics supplement is surprising, as is the late inclusion of the Spider-Man strip. I note that an April 1975 instalment of the supplement includes an Ape Mask competition, so the Newton office was certainly conscious of Apemania at this stage. Methinks there's a little chapter of the story to be teased out here...
Posted by spiros xenos at 4:55 PM

In the offices of Newton as they prepared the news of the Favouri…, uh, Fantastic Four:

“Quick! Get the office junior to find a relevant panel from the Fantastic Four comic. It’s gotta show what a great superhero (sic) strip the Favourite (sic) Four are. It might be even more popular than Spiderman (sic).”

Anyway... a few days later the following was overheard by a passer-by on the street:

“Hey honey! The Observer’s printing romance comics for housewives to read whilst making dinner or before you iron all my shirts for work. “Favourite Five” sounds girly, like it might be based on Enid Blyton?”