A Visit With The Fantastic Four in Australia

As readers and collectors of Australian editions of vintage US comics we are rather accustomed to odd or inexplicable editorial decisions. Whether it's alternative covers to issues or modified contents,  benign intervention or careless butchery, it's part and parcel of our experience and obsession.

However, there is one story which has been subjected to such a range of modifications that it warrants special attention. 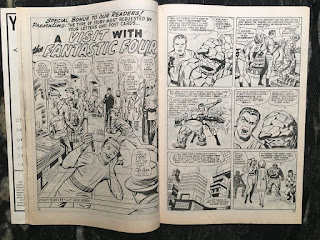 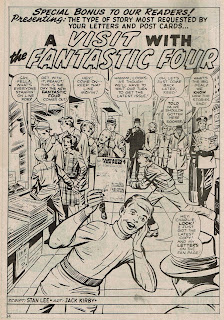 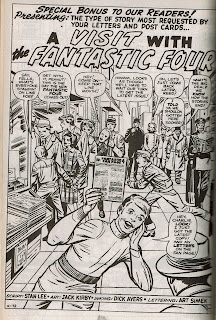 The differences are fairly obvious: The Newton edition omits some of the creator credits, and the job code is also omitted.

This story was first published in Australia in Horwitz Publications' Strange Tales #4 in 1963. Take a close look at the splash page in this edition: 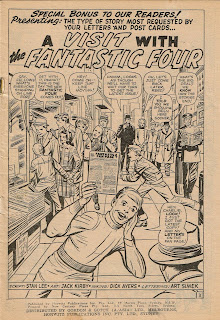 On first blush it appears to be a rather faithful reproduction of the version in Essential Fantastic Four, apart from the missing job code and the page number. One might even observe that the linework is distinctly clearer than both the Essential and the Newton editions.

Heh. What can I say...? After all, it was the tail end of the Menzies era... And if the singular "fella" needs to be changed to the plural "fellows" to maintain decorum, well, sacrifices have to be made. You'd think it was the ABC newsreader of 1963 editing this comic! Never mind they didn't deem it necessary to correct "standing on line" to "standing in line"!

If all of that isn't enough to have you running earnestly to your battered original copy of Fantastic Four #11, get a load of this printing in Yaffa/Page Publications' Fantastic Four #200-201: 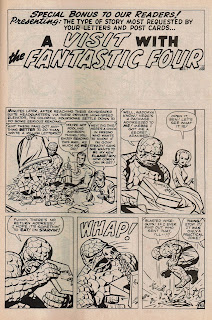 The title text box has been crudely transplanted atop the first two tiers of the fourth page of the story, in the process eliminating not only the third tier of the page, but wholly omitting the second and third pages, and the splash page image!

I can't think of any other single page reprinted in Australia which has been subjected to as many instances of grievous adulteration.

And after all this, what does the original page look like?

Well, here's an online a scan of the page from Fantastic Four #11: 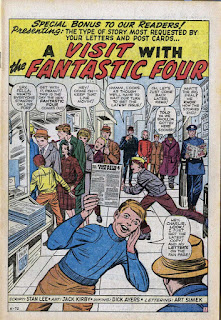 And while we're at it, here's a few more scans of the page from various editions, beginning with Fantastic Four Annual #3: 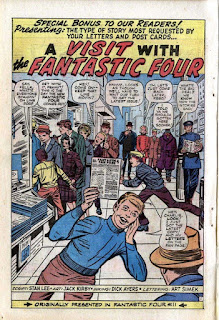 And here's a  grey-scale printing of the Fantastic Four Annual #3 version as it appears in Les Daniels' Comix: A History of Comic Books in America: 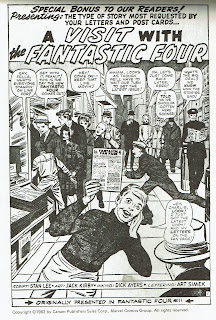 If you find the muddy grey tones pukey then it might be best to look away as I present to you the version published in the UK in The Mighty World of Marvel #22: 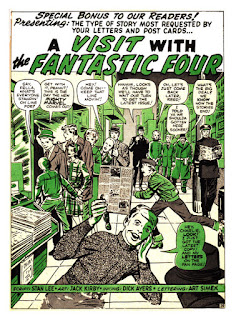 And if you need some Alka Seltzer, this might settle you down a tad: 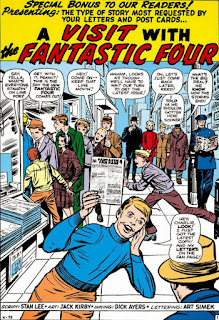 I'm not sure of the source of this printing - I found it online - but it does a reasonable job of representing the original colours, albeit brighter and cleaner on glossy paper. Initially I assumed it to be from a Marvel Masterworks edition. Then I received a photo of the page from Marvel Masterworks #6, October 1988: 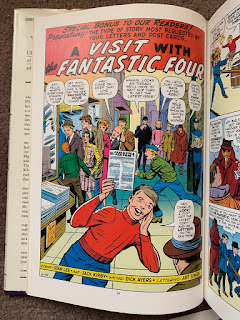 It's arguably more attractive with the new colour scheme, but it cannot claim archive standard fidelity to the source material.

(And to add insult to injury... When Yaffa/Page Publications published The Hulk vs. The Thing in Fantastic Four [Vol. 3] #1, they also managed to omit the original splash page, just as  Newton Comics did in Planet of the Apes Annual #1 - but, unlike Newton, they did not bother to surgically transplant the splash page from A Visit With The Fantastic Four.)

Thanks to Mark Cannon and Mark Muller for providing some of the scans above.
Posted by spiros xenos at 5:22 PM