When I was indexing Newton Comics series such as Planet of the Apes and The Amazing Spider-Man a few months ago there was one issue which kept intruding into my schema and messing up my orderly data. It has happened again as I attempted to attribute publication dates to The Avengers in August and September 1975, but I think I may have finally resolved the conflicting information.


Conan the Barbarian #1 was advertised in various Newton comics as On Sale 30 August 1975: 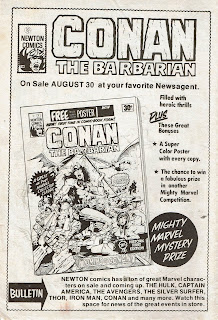 However, I believe it was published earlier on 16 August 1975.

The advertisement above is scanned from The Avengers #3 which was published 9 August 1975.

Conan the Barbarian #1 was advertised as On Sale Now in The Avengers #4: 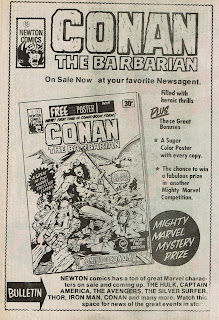 The Avengers #4 was published 23 August 1975 -  a week before 30 August 1975. This is the contradictory information which needs to be reconciled.

The Avengers #4 was the first issue in the series to be issued fortnightly - the first three issues were published every three weeks - and this was announced in John Corneille's letter column in this issue.

The new fortnightly schedule is reinforced by the contest expiry dates in The Avengers #3 and #4 - 22 September and 6 October respectively.

Given the scheduling was changed, it is reasonable to presume that The Avengers #4 was originally scheduled for publication 30 August and, having brought the date forward by a week, the discrepancy in the advertisement was overlooked by Newton, or it was too late to change.

However, there is mounting evidence that the advertisement in The Avengers #4 is accurate.

For example, the Conan series is listed on the subscription page in The Avengers #4. In itself, this is not conclusive evidence that Conan was published before 30 August, as it could be symptomatic of the earlier than expected release of The Avengers #4.

Consider also that Conan is listed on the subscription page in The Fantastic Four #4 and The Amazing Spider-Man #5, which were both published on 16 August, and have the same contest expiry date as Conan the Barbarian #1.

Indeed, the subsequent issues in these series - The Fantastic Four #5, The Avengers #4, The Amazing Spider-Man #6 and Conan the Barbarian #2 - all share the next letters page, and are all published after 16 August 1975.

In fact, the only evidence pointing to a 30 August 1975 publication date for Conan the Barbarian #1 is the advertisement above. All of the other evidence suggests otherwise. And when I balance the merits of crosschecked data against a single outlier, I know which way I land.

Having said all that there is still a small thread I have yet to fully untangle.

Planet of the Apes #6 also carries the Out Now advertisement for Conan the Barbarian #1. I have previously provisionally dated this to 16 August 1975. The contest expiry date in this issue is 6 October 1975, as per The Avengers #4, which would suggest this pair were published simultaneously. - except that I date The Avengers #4 to 23 August, and the letters pages do not match. I need to investigate this a bit further but wilI have to wait until further information (ie: missing posters in my collection) comes to hand. I do not yet know how this may impact my conclusions.

It should also be noted that the contest expiry dates, whilst generally useful, are not an infallible guide. Certainly in early 1976 many contest dates were manifestly incorrect, as I have previously noted. But even some June and July 1975 issues have anomalies, which makes it difficult to assess when to heed them and when to dismiss them.
Posted by spiros xenos at 6:03 PM