Daredevil #5 and iron Man #5: The folly, the anomaly, and the temptation of confirmation bias

Because I'm perverse and find comfort in folly, rather than proceeding with a resume of the evidence for my Yaffa dating exercise, I'd like to firstly outline an example of the type of anomaly which I've had to deal with.

In reviewing the formats and cover prices of a number of Yaffa series I have established this reliable pattern:

This pattern is confirmed by series such as Conan the Barbarian, The Avengers and The Tomb of Dracula.

The Daredevil series bucks this trend as #5 is a regular/magazine-sized edition, and has a 1980 indicia date. In other words, instead of being a digest-sized issue it is a regular edition. 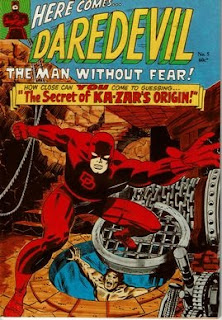 I'm pretty sure the $0.60 digest comics first appeared in mid-1980, possibly a month or two earlier in March or April 1980. Apart from the indicia, I can confirm at least two - likely more - digest editions in ongoing series carry advertisements for The Incredible Hulk: The Movie, which places them mid-1980. Working on the assumption that the digest format was instigated as a cost-saving measure - maintaining the price and page count but compromising on the paper size - I've assumed the shift to digest-size was permanent and that there was no overlap between the regular and digest editions in terms of printing (although of course there may have been some overlap on the stands).

Given this, it appears Daredevil #5 was published very early in 1980, before the #5 issues of series such as Conan, The Avengers and Dracula. All well and good.

Another series which closely follows the  schedule set by Daredevil is The Invincible Iron Man. It conforms in terms of format, issue numbers, cover price and indicia dates, including a #5 in the regular size. 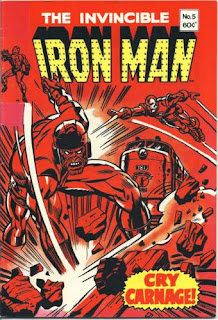 The anomaly with Iron Man #5 is that my copy has a pen marking on the rear cover 11A. My understanding of handwritten numeric notations by newsagencies is that they indicate sell-by dates 2 months - possibly 3 months - after the on-sale date. If the 11 indicates November, it places Iron Man #5 on the stands in August or September 1980, after the first digest editions replaced the regular editions in mid-1980. The other anomaly is the A after the 11 in the notation. I don't know what this means. I have seen it before, but I don't know if it is significant in terms of qualifying the date or not. I suspect not, but it may. Which still leaves me with the question of when in 1980 Iron Man #5 was published. 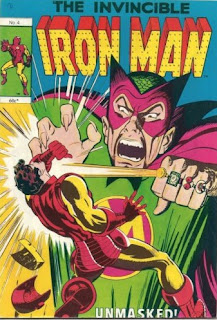 Invincible Iron Man #4 conforms to the pattern established so far. It has an indicia date of 1979, a $0.60 cover price and 60pp. My copy has 2 written on the cover. Assuming this indicates a February 1980 sell-by date, it would suggest there was an 18-month gap  between Iron Man #4 and #5. 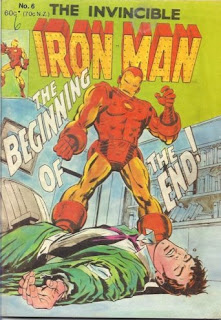 My copy of Iron-Man #6 is a $0.60 digest-sized issue with an indicia date 1981, and has a 6 marked on it. This indicates a 7-month gap between #5 and #6. In other words, three consecutive issues are stretched over an 18-month period with the middle issue published close to the middle of this period.

So, what to make of this information? The temptation - the confirmation bias protocol - is to ignore the 11A on Iron Man #5, assume there was no overlap between the regular editions and the digest editions, and deem it most likely published very early in 1980, as per Daredevil #5.

Another possibility is that it was indeed printed before the digest editions became the standard format, but wasn't distributed until much later. Tempting, given it fills a publishing gap neatly and evenly between Iron Man #4 and #6. But I don't think I can presume that much forethought on behalf of Yaffa.

The best I can do for the moment is to accept the evidence that there may have been some overlap between the two formats, and concede that if Iron Man #5 was published in August 1980 rather than September 1980, an overlap in the second trimester of 1980 is not out of the question.

I note also that the price box on Iron Man #5 resembles the price box which appeared on many - not all - of the digest-sized editions. Daredevil #5 doesn't have a price box (neither does Iron Man #6 for that matter), but it does suggest some small connection to the digest editions inasmuch as it is an editorial intervention, which I do not offhand recall on earlier regular-sized editions.

I'd like to inspect other copies of Iron Man #5 to check if they have a different date pen marked - say a 3 or a 4, or if they also have an 11 marked. This would settle the question for me. In due course I'll check for any other issues which may shed light on this, for example other #5 regular sized editions published in 1980.
Posted by spiros xenos at 12:43 PM