Shock Stories: A second run on the racks? 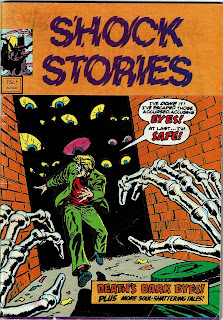 Shock Stories is a recycled, retitled 'short' digest issue with a $0.75 cover price. It is one of many such recycled reprints of Yaffa's range of Marvel comics.

The point of focus on this issue this time around is the handwritten date on the top left hand corner which says 12/85. This is much later than any other record I have to hand regarding Yaffa's Marvel issues. Federal Comics were publishing the Marvel reprints in Australia from 1984.

So what to make of the date?

I believe it is by a newsagent's hand, and I do think it refers to a sell-by date, but I don't think it represents a publication date of late 1985. I think this is an issue the newsagent returned to the racks for a second round. If you look closely at the pencilled date you will see a 2 written before the 12/85. Could this refer to a 2nd run on the racks? It also appears to me as if that top left hand corner has been subjected to some rubbing, as if a previous pencilled date has been erased and replaced by the 12/85. This may also explain the incidence of the letter A I noticed on some other digests.

This is all conjecture on my part. For what it's worth I do have anecdotal evidence from friends who worked in newsagencies that such issues did find their way back onto racks and shelves long after their initial publication, but I haven't heard that they were marked in such a way.

What I'd like to see is another copy of this issue in order to crosscheck any dating details.

I have yet to pair this issue with an initial Yaffa printing, however I expect this is a reprint of Yaffa's Chamber of Chills #5. TBC.
Posted by spiros xenos at 12:29 PM