Over the last week or two I have been going over my collection of Yaffa Marvel digests trying to identify publication dates. I had been operating on the assumption that Yaffa had ceased publishing Marvel editions by late 1981, but as my collection grew and I started filling in blanks - especially in regards to recycled retitled editions - I found mounting evidence of issues published in 1982. Further interrogation led me to believe issues were published in 1983, and I have now found compelling evidence that they were published as late as early 1984.

About a year ago I purchased a single large batch of Yaffa Marvel digests. This batch included Untamed World of Conan and The Legend of Conan.

The cover to Untamed World of Conan has 10 written in pencil on the cover: 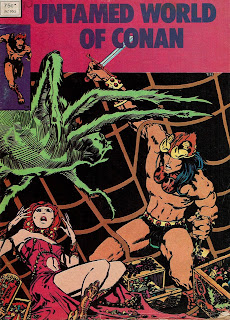 A pencilled note on the first page reads AUG 83: 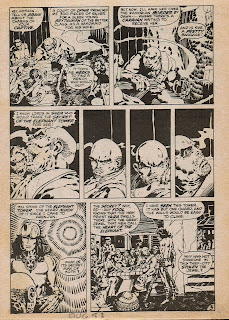 This strongly suggests that this issue was purchased in August 1983 and was to have a shelf life of two months until October 1983 as per the newsagent's note.

The cover to The Legend of Conan has 3 written in pencil on the cover: 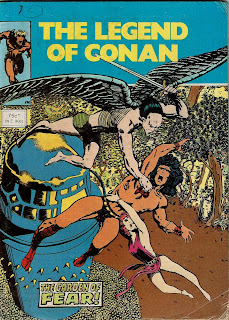 A pencilled note on the first page reads SYD.NEWSTAND JAN 1984: 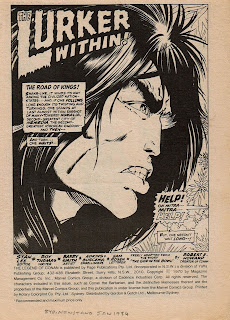 This strongly suggests that this issue was purchased in January 1984 and was to have a shelf life of two months until March 1984.

Until now, as evidenced in recent posts, I have deemed the sell-by dates indicated by a newsagent's markings as designating an on-sale period of date 3-4 months. I now believe the on-sale period to be 2 months.

The indicia in both of these issues states in part: "The characters included in this issue such as Conan the Barbarian and the distinctive likenesses thereof are the properties of the Marvel Comics Group and this publication is under licence from the Marvel Comics Group." However, I believe there is evidence to suggest that the Yaffa licence had well and truly expired some time earlier - probably as early as 1982 - and that they were publishing recycled reprints of earlier licenced material as a last gasp run on the fumes of an empty tank, hence the numerous $0.75 cover price recycled and retitled digests, not to mention the $1.10 regular sized recycled reprints which typically ended series such as Conan the Barbarian.

This begs the question of whether there was any overlap between Yaffa's Marvel reprints and the beginning of the Federal Comics licence, which I'll deal with in a separate post. For now, the Junkyard is extremely pleased to have found compelling evidence of the publication of Yaffa Marvel comics in 1984. And I have a lot more to say about these in pending blog entries.
Posted by spiros xenos at 1:45 PM