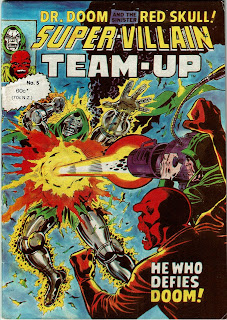 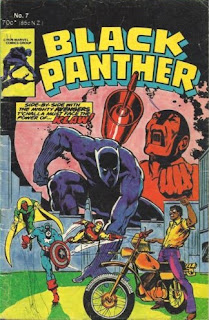 There is an interesting relationship between these two issues which I'll try to unpack with a bit of legwork and guesswork, and then sit back and see if I end up with egg on my face.


As far as I know Black Panther #7 is the last issue in the ongoing series. Black Panther #7 reprints The Beasts in the Jungle! and Revenge of the Black Panther! from the last two issues of the short-lived  Black Panther (1977-1979) series. Again, not enough material to satisfy a complete Yaffa issue. But, in this case, the extra pages are filled by the 'missing' U.S Super-Villain Team-Up #17 story Dark Victory.

This still leaves Shall I Call Thee Master? out in the cold. I'm assuming it was reprinted, but I don't know where. 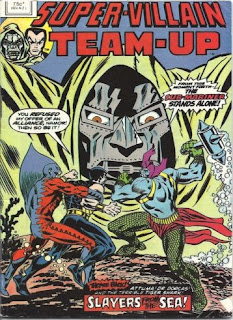 I suppose I should confirm that Super-Villain Team-Up #5 and #NN are both 'short' digests and Black Panther #7 is a 'long' digest, but given the dates and cover prices and # information above, I figure we're all au fait with that now.

Anyway, it's now a matter of sitting back and seeing if and where Shall I Call Thee Master? turns up, and whether there are such things as Yaffa editions of Super-Villain Team-Up #6 and Black Panther #8.