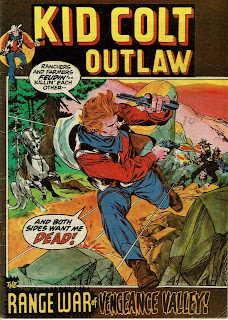 This digest-sized Yaffa issue of Kid Colt Outlaw does not have an issue number, nor a cover price, so I have always deemed it an unnumbered issue similar to many one-off recycled digests issued by Yaffa after the original run of the series expired.


I now believe it is #5 in the series, incorrectly unnumbered and also missing the cover price due to a printing or editing error.

The first indication of this is the 1981 indicia date, which sets it in the first phase of the Yaffa Marvel digest editions,

I'll be on the lookout for a legitimately unnumbered $0.75 recycled edition. 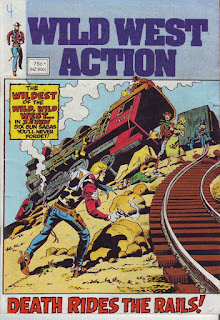 Update: I can confirm Wild West Action is indeed a reprint of Kid Colt Outlaw #3, a digest-sized issue.
Posted by spiros xenos at 5:17 PM